Every day, at least once, but usually twice, my head gets heavy, as if a weight sits on my skull, and I know, right then, that sleep is coming. If I don’t put my head down immediately, the heaviness only gets heavier. My joints begin to ache and a wave of nausea comes over me. And if I still don’t sleep, the back of my eyes begin to burn and I start losing contact with myself – where I am and what I’m doing. Eventually, this leads to sleep – not because I’ve reached a safe and appropriate resting spot, but because I had no choice. Sleep chose me. 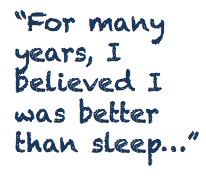 These sleep attacks are a fundamental part of my daily routine – as automatic and compulsive as eating food and drinking water. For many years, I believed I was better than sleep; I thought I could brush it off with a coffee or a red bull. One time in college, while studying late at night in the library, my sleepiness felt unusually powerful, but then came the flood of legitimate excuses. I was a varsity squash player with a strenuous practice schedule. I was either up late studying or out late partying. It all made sense. Perfect sense. Everyone feels tired at times, it’s only natural, I thought.

Sleepiness is not problematic. Quite the opposite – it’s a welcome calming, a joyful sign of dreams to come, a precious passing, a floating away from life’s stresses, a first taste of the ultimate release- the sweet peace- of sleep. 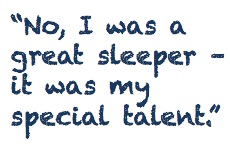 For years, I believed that my sleepiness was harmless. I was just a good sleeper. No, I was a great sleeper – it was my special talent. I sat through lectures, drove cars, cooked meals, visited museums, watched movies, wrote papers, and took exams – all the time fighting a heaviness of excruciating depths that I thought I could will away.

When things got worse, I developed a series of special tactics to perform in any bathroom to wake myself up. I ran cold water over my face and down the back of my neck, did jumping jacks in the handicap stall, pinched my thighs and arms, and slapped myself, hard, across the face.

The slaps were most satisfying, not because they woke me up, but because someone or something else inside of me needed them. These slaps released a rage in me; a rage for lacking backbone and discipline, for being unable to perform the simplest of simple tasks of just – staying – awake. This anger is something that most decent people would never unleash across another’s cheek. Luckily, no one else’s body was involved in my wrath.

Yet one morning, after years of sleepiness, I awoke from a perfect night’s rest and began working at my bedroom desk. I was awake for about a half hour before tiredness crept back in and cornered me again. I looked at my bed – still warm from my night’s shadow. No, Julie. I turned back to my computer to continue working.

Soon words from the screen began spiraling through rollercoaster curves inside my head, freed from sentences and paragraphs, they swam in a no-man’s-land between consciousness and unconsciousness. Finally, sitting upright in my chair, two feet from my pillow-top queen-size mattress, I drifted off to sleep. Napping in the morning? I couldn’t be sure, but this didn’t seem right.

When sleep becomes a problem – it’s not usually sleep that’s really the problem. Sleepiness is a sign of other things; an indicator for another, more real, underlying medical or psychological problem. Maybe it was depression, though I didn’t feel depressed; I just felt tired. Maybe it was my thyroid. Tests were conducted – no problem there. Maybe it was sleep apnea, a pulmonary issue of sleeping and breathing. Yet sleep apnea wasn’t it either.

Turns out, it was all in my head. At some point, I don’t know when, I started losing brain cells. Not just any cells, but a very specific group of cells called hypocretin, tucked away in the almond-sized hypothalamus region deep in the center of the brain. No one knows exactly why these cells disappear; it’s possibly an autoimmune reaction – mixed up signals, mistaken attacks on myself. 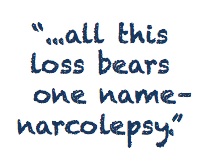 What is known is that these hypocretin cells are somehow integral to the proper functioning of the sleep/wake cycle. Without them, the boundaries between waking, sleeping, and dreaming, are… well, confused. This confusion has led to a number of curious and sometimes dangerous situations for me – times when I’m partially awake and partially dreaming, times when my brain and body are in conflicting parts of the cycle. Scary places of hallucination and muscle paralysis that most people, thankfully, never experience. Oddly enough, all this confusion was brought on by a microscopic loss of cells I’d never known I’d had, never mind lost. And even odder that all this loss bears one name – “narcolepsy.”

The sleepiness of narcolepsy, technically called “excessive daytime sleepiness,” means that, even with the best medication available – amphetamines and other wake-promoting drugs, my brain still demands to be shut down multiple times a day. People who don’t have narcolepsy constantly “know how I feel” and I nod my head in agreement, like a plastic bobble-head doll. 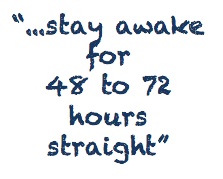 It’s been said that an average person would have to stay awake for 48 to 72 hours straight before they would feel the same violent call to sleep I experience daily.

Sleepiness is similar to hunger and thirst – all three are involuntary commands intended to provoke certain responses. Hunger and thirst are the body’s signals to eat or drink something. Sleepiness is the body’s command to sleep. These are not unpleasant sensations at first, just subtle reminders to give your body what it needs.

Imagine being hungry but denied food for 48 to 72 hours. I’ve never gone so long without eating, but I would expect that the experience would reach dark places of mental and physical anguish. If I spoke to someone who hadn’t eaten in 48 to 72 hours – I wouldn’t say, “I know how you feel” because I missed breakfast yesterday. 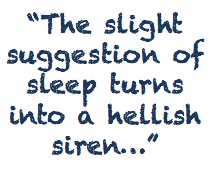 For me, sleepiness is like starvation. When I feel as if I haven’t slept in over two full days, pleasantries fall by the wayside. The slight suggestion of sleep turns into a hellish siren – incessant screeching demanding that I shut up, lie down, and drift off to dreamland. All other thoughts and feelings disappear, and in that moment, I’m chained to sleep.

There is no cure for narcolepsy – no known way to replace or mimic the cells that regulate the proper functioning of the sleep/wake cycle. Sleepiness may never be the pleasant passing it used to be, but I’ve stopped fighting it. I’ve realized that the weight on my skull is not to be ignored. I’ve given up my special tactics, they don’t work. I know now that sleep always wins, which makes the game a lot easier to play. 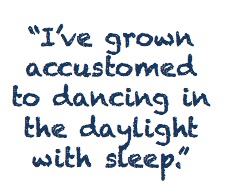 When I sense sleep lurking behind me, even in the far distance, I start preparing for its arrival. If I’m driving, I pull over to the best possible spot. If I’m out in public, I try to reach a bathroom or semi-private space. Lying down is ideal, but sitting with my head supported works too. I let sleep take me as soon as possible now, it washes over me for fifteen minutes to an hour and then it lets go. As quickly as it came, sleep disappears and I return to myself, rising to stand on my own two feet again.

There’s no exact science to my safety and survival, but I’ve grown accustomed to dancing in the daylight with sleep. It was haphazard at first, but even this strange existence has a rhythm of its own. I listen closely for when it’s my turn to lead and when to follow. Our steps remain small, but we’re picking up speed.

This essay was first published in SleepMatters: A Publication of the National Sleep Foundation (Spring/Summer 2012) . [View/download PDF of published article here]