With 16 days until the Marathon, I’ve decided to discuss an aspect of narcolepsy I’ve never discussed here on this blog.

One evening in June of 2007, while sleeping overnight at my dad’s house, I awoke in the middle of the night to the repeated ringing of the doorbell.  Hours earlier, I’d fallen asleep on the living room couch.  From here, I was closest to the front door – which I guess explained why I was the only one that had woken up to the ruckus. Perhaps my dad couldn’t hear the doorbell from his bedroom. Yet the ringing was aggressive – an incessant punching at the glowing rectangular box on the other side of the front door.

Wide awake now, I thought I better get up to see what was going on. However, when I attempted to sit up, I found that I couldn’t move. I was strapped into the couch, like an astronaut at take-off. I tried to fight the heaviness but it was unforgiving – and the doorbell kept ringing and ringing  – spirals of high-pitched synthesized ding-dongs. Enough already! I’m coming… Well, I’m trying…

After a little while (a period of time which felt long but may have only been a few seconds), I broke free of the strange restraint and lifted myself to a seated position on the couch. Now, sitting upright  – something seemed strange. The house was absolutely silent. I looked out across the living room towards the front door. Everything seemed completely normal but not normal at the same time. What had happened to the doorbell? Why had the person stopped ringing it now? Was anyone still out there? 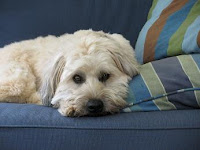 I looked down and noticed our dog, Sox, by my feet. Sox, a beautiful white fluff-ball Wheaton Terrier, was curled up and conked out. It was picture-perfect really, something contrived for a cheesy dog-lovers calendar.

Wait a minute – why hadn’t Sox responded to the doorbell? She’s a lively pup, always up for an adventure. If someone rang the bell, Sox would’ve dashed up to report to her usual look-out post – standing on her hind-legs to see out the front window. Yet here she lay, like dead weight by my feet. Did she sleep through the doorbell-ringing marathon? Impossible.

Then, it occurred to me that perhaps when I thought I’d heard the doorbell ringing – I actually hadn’t. Maybe it was just a dream… a dream up until what point? I had no clue – the series of noises and actions were hard to separate into an exact chronology.

Also, if the doorbell was just a dream, how could I have heard it so clearly that I could still hear it right there in my memory, like the last song on the radio or an annoying TV commercial stuck in my head? It wasn’t a faint memory of an innocuous doorbell – it was an exact “ding-dong” sound, with a particular pitch, volume and rhythm. Which should I believe – my clear memory of the past moment or my clear mind in the present moment? Both experiences felt equally real, yet for one to be true, the other had to be false. 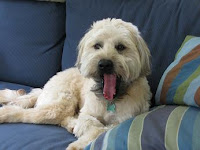 Of course, on this evening in June of 2007, I was perfectly happy to reach the conclusion that my ears were lying to me and that no one had been outside ringing the doorbell in the middle of the night. I was also very comforted by Sox’s presence, as she helped me reach this conclusion quickly before I had the chance to panic about the possibility of an intruder or an emergency. I could fall back asleep with ease, knowing all was well. And that’s exactly what I did.

I was fast to accept the inconsistencies in my experience – that I was both so sure that I heard the doorbell and yet simultaneously so sure that I hadn’t. How could I, a smart and competent young-adult at the age of 22, not be able to distinguish the edges of dreams from the tips of reality? How had the picture gone so horribly blurry that I looked to a dog to regain my bearings?

At the time, I didn’t ask myself these questions. Come morning, I didn’t share this experience with anyone. There was no need to – nothing had happened.

I know now that this experience is part of narcolepsy. Hypnagogic and hypnopompic hallucinations and sleep paralysis are major symptoms of narcolepsy, but it is important to note that normal people can experience these as well (they just tend to affect people with narcolepsy much more frequently).

This is another example of REM sleep triggering at inappropriate times. In this case, part of my brain is still “dreaming” while another part of my brain experiences these dreams on a very conscious level, and I’m unable to move my muscles – still in the paralysis of REM sleep.

Although my nighttime medication has greatly reduced the frequency of these experiences at night, I still have these during naps. Sometimes its a scary dream about an intruder, sometimes it’s as innocuous as a dream about my roommate coming home. Now, I discount almost everything I experience around my sleep-time, because, more often than not, it didn’t actually happen. I like to think of this as a special talent, that I’m able to be both wide awake and dreaming.