Columns of buttery yellow sunshine spread across a crystal blue sky. A few fluffy white clouds drifted aimlessly above. As I ran long the Potomac River at sunset yesterday, I found something I hadn’t realized I’d been missing. 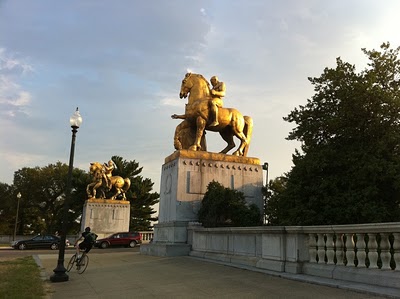 Recently, my life changed dramatically.  At the beginning of September, within one week, I started a new job working full-time and moved apartments to a whole new area of DC.  I am a creature of habit; I hate change. I’m one of those people that finds one path I like and runs it over and over without mixing it up or exploring new grounds. Change is difficult for me, so although I actually love my new job and apartment, I’ve been feeling very “lost” recently – both literally and figuratively.

With all this change – I hadn’t been running in a while. How could I go running – I wouldn’t know where to go?! Nonetheless, yesterday morning, I packed an extra bag for work – my running shoes and gear.  There had been talk of me possibly running next year’s Boston Marathon with Wake Up Narcolepsy.  I didn’t know if Wake Up Narcolepsy would be able to secure official bib numbers for the marathon yet, but I thought I better get started on some preliminary training. If we did get the bibs, I didn’t want to start training cold-turkey. I wanted to ease my way into back into the routine and for some odd reason, yesterday struck me as the day to start.

In preparation, I mapped out my route quickly using google maps, as I’d never run in any of this area before. Luckily, I now have a “smart phone” with mapping GPS capabilities, so I wasn’t worried about getting too lost. So long as I had my phone, I would be okay, I told myself.   After work, I changed into my running clothes and set out towards the Lincoln Memorial to run home. 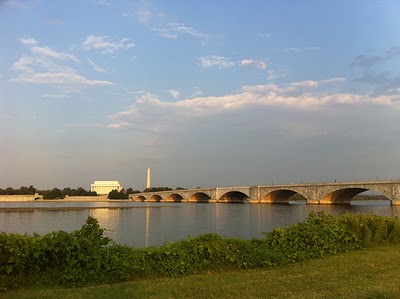 Just a few minutes into my run, I crossed the Arlington Memorial Bridge into Virginia and ran along the waterside paths towards my new home. The sunlight was surreal, like something out of a movie-set. I don’t consider myself a religious person, but if I did, I would think God was personally reaching out to me from the sun’s rays. I wished I had brought my camera with me, but then quickly remembered that my new phone also has a camera feature! I stopped many times along the way to walk and take photos.

As I ran closer and closer to Reagan Airport, airplanes began dipping very low above my head, a few sinking so low that I instinctively found myself physically “ducking” in reaction to their wake. The lion’s roar of their engines invigorated me with life. I couldn’t stop smiling to myself.  The accompanying sunset and waterfront view of DC was overwhelmingly beautiful. And then it hit me, “This is my favorite place.”

I’ve lived in DC for just over a year now, and just yesterday, I found my favorite place. In Boston, there was a particular spot along the Cambridge side of the Charles River with a beautiful view back of the skyscrapers – this was my Boston “spot,” which I made a point of running past on almost every run for four years.

I hadn’t realized I’d been missing a favorite place until I found it yesterday. Here I was in a totally foreign area of DC – forced here by circumstance of my new job and new apartment -and for the first time, I felt like I belonged. I tried taking a picture to capture the moment. When I got home (much later, as I’ll describe in my next blog post), I got word from Wake Up Narcolepsy founder, Kevin Cosgrove, that we received Boston Marathon 2011 bibs, making yesterday’s run my first official training run for the Boston Marathon 2011!!
Looking back at my photograph from the base of the airport, I can’t think of anything to better capture my euphoric joy and hope for the future. 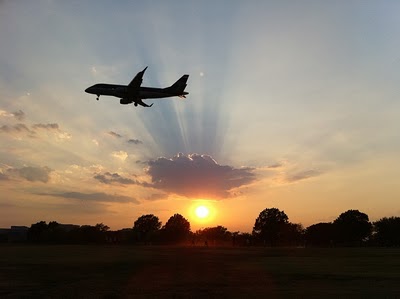 In closing, there is one small moral of this story:  if you don’t consider yourself a runner today, start tomorrow. Don’t think, just run.  Don’t consider your body’s limitations. Don’t think about how tired you feel. Don’t think at all, just leave. Get up and get out. Run until you’re tired, even if it’s just 2 minutes. And then walk. Walk until you feel rested, and then run again.

Yesterday, I realized that evil “change” may be a good thing sometimes. I’d been feeling down recently, and I never imagined that one simple jog could change all that but it did. When you least expect it, you may run into something unforgettable.