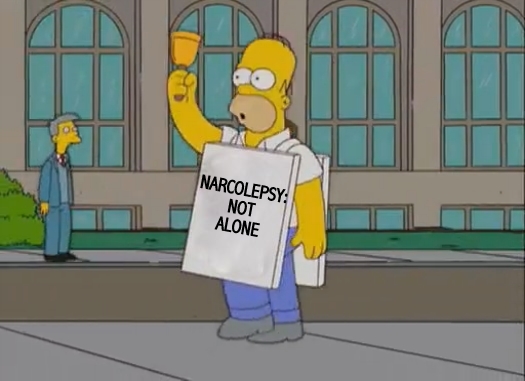 It seems that Hollywood has a surprisingly large percentage of cases of narcolepsy, a disorder affecting 1 in 2,000 people, about 200,000 Americans and 3 million people worldwide, including many children and young adults.

The latest Hollywood victim is Homer Simpson. Word on the street is he going to discover he has narcolepsy in the premiere of the 27th season on Sept. 27 on FOX. The Simpson’s EP Al Jean describes, “it’s discovered after all the years Homer has narcolepsy and it’s an incredible strain on the marriage. Homer and Marge legally separate, and Homer falls in love with his pharmacist, who’s voiced by Lena Dunham.”

As a narcolepsy spokesperson living in Los Angeles, I’d like to invite Homer Simpson to join our local Narcolepsy LA Meetup group. Or perhaps there’s a support group in Springfield, I’ll have to check. 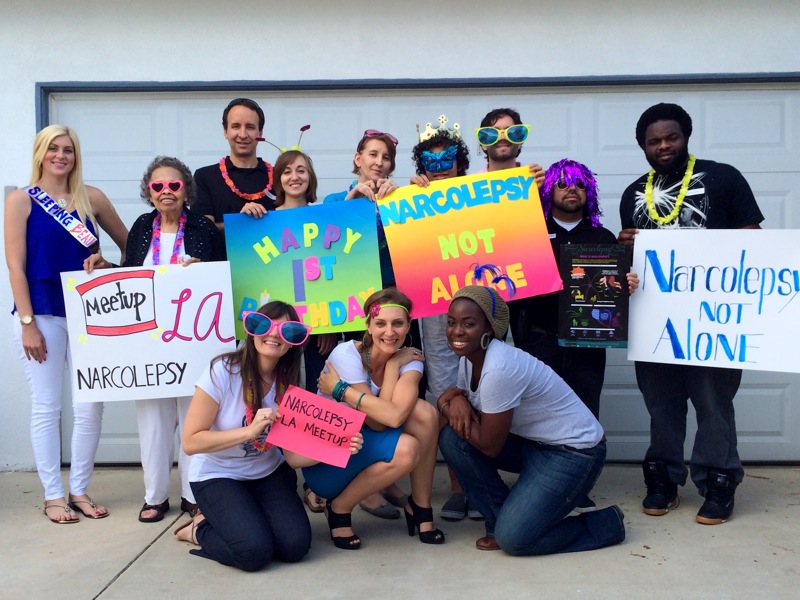 Homer isn’t the first celeb to be struck with “narcolepsy” in Hollywood. Cases seem to be cropping up at an increasing rate and I’m starting to get concerned about the water here in L.A. Since the CDC hasn’t returned my call yet, I enlisted my friend Rebecca Fuoco (who took one epidemiology class in graduate school) to chart the incidence of narcolepsy among television and film characters. 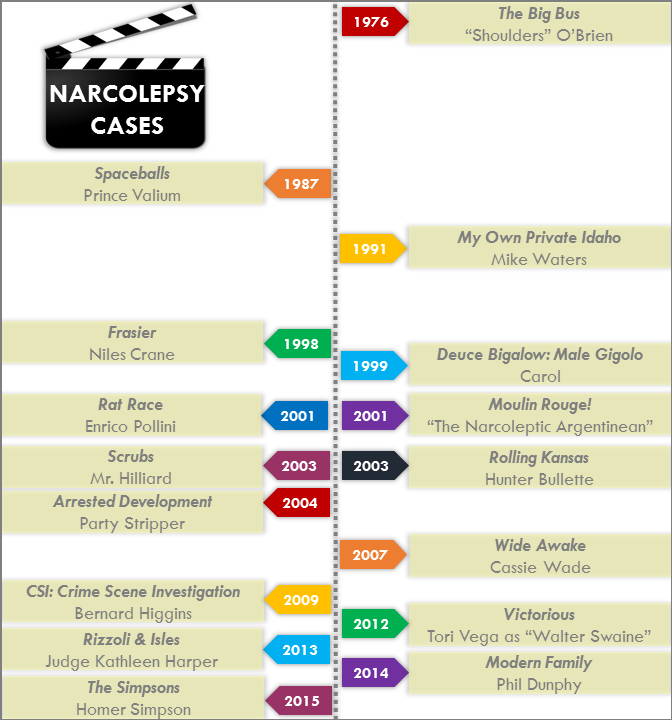 But seriously, if Hollywood’s narcolepsy looked anything like the real condition, I would be jumping for joy right now. What great free publicity and awareness!  And if only Lena Dunham was my pharmacist, that would be awesome. But my experience is quite different.

What is narcolepsy?
Narcolepsy is a neurological disorder of the sleep/wake cycle. Sleepiness is a symptom, but much more invisible and pervasive than Hollywood’s version. Other major symptoms include cataplexy (a sudden loss of muscle tone with emotions that can lead to full body paralysis), terrifying hypnagogic hallucinations and sleep paralysis.  Real people with narcolepsy manage their condition with multiple medications and diligent attention to their health, but there is no cure and no two cases are exactly the same.

What is Hollywood’s narcolepsy?
Hollywood’s narcolepsy is usually the same – an individual falls asleep in the middle of a sentence or while standing. (While some people with narcolepsy may experience sleepiness like this, it is not the typical manifestation and certainly not what doctors are looking for to diagnose the condition.) Hollywood’s narcolepsy rarely includes the other very serious and real symptoms of cataplexy, hypnagogic hallucinations and sleep paralysis. Hollywood’s condition is comedic and sometimes even curable, wow!

Since the Simpsons episode will not air til September, I don’t know if Homer will have Hollywood’s narcolepsy or the real condition. Given the nature of the show and the history of Hollywood’s cases, I’m not optimistic. I imagine Homer’s laziness will now be discovered to be sleepiness, and that will be the extent of his “narcolepsy”. Interesting that Marge would stay with Homer for all these years when considered so lazy, but now that it’s discovered he has an actual medical condition and is getting treatment, their relationship suffers. That stinks.

But what stinks more is that people see Hollywood’s version of narcolepsy on screen and assume that this is representative of the real condition. This perpetuates misperceptions leaving those of us with the disorder feeling misunderstood and isolated. There’s a stigma around having narcolepsy and many people keep it private to avoid undue jokes, ridicule and discrimination. 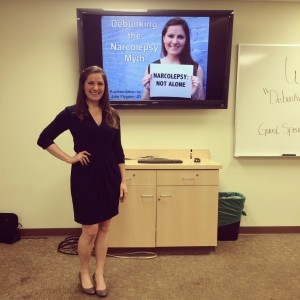 Misperceptions also may also lead to delayed diagnosis. On average, patients suffer 3 to 5 years before receiving accurate diagnosis, sometimes 10 to 15 year. Sadly, 75% of real cases are undiagnosed or misdiagnosed with other conditions like epilepsy, schizophrenia and depression.

Of course, delayed diagnosis of narcolepsy is not necessarily Hollywood’s fault. Information about narcolepsy and other sleep disorders is extremely limited in the medical school curriculum, and I dedicate much of my awareness efforts to speaking to physicians and med school students. Yet with such limited medical school exposure, some physicians’ knowledge may mirror society’s misconceptions.

Do I have a sense of humor about narcolepsy? Absolutely. When I get together with other people with narcolepsy, we often laugh to the point of tears at some of the ridiculous and ironic aspects of our condition. This is important therapy. 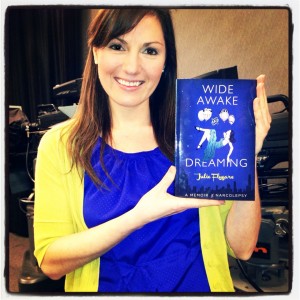 “Wide Awake and Dreaming: A Memoir of Narcolepsy” by Julie Flygare

Do I find Hollywood’s narcolepsy funny?
No, not really. I don’t relate to the character’s experiences, so there’s no “omg, that’s so true!” moments like when a good comedian points out something you hadn’t realized or articulated.

And maybe I don’t find Hollywood’s narcolepsy funny because the joke is really old. Seriously, snoozefest. Get some new content.

And I probably don’t find it funny because I’ve dedicated my life to changing misperceptions and building a brighter future for people with this condition.

But what really hurts is thinking about children and young adults with narcolepsy, these everyday superheroes, who will be watching the Simpsons in September. They will likely see a distorted version of their illness lead to marriage breakup. A little piece of hope will die that day.

Regardless, I will keep fighting to bring positive accurate awareness. My non-profit organization, Project Sleep, will keep giving out scholarships to amazing students with narcolepsy who exemplify courage and hope despite this adversity. I will keep reminding people with narcolepsy that they are overcoming adversity daily and deserve to feel proud.

This is not the first time the Simpsons will offend people. It is a parody, after all. I wish they’d chosen a different disorder, perhaps epilepsy or Parkinson’s disease? Oh wait, people wouldn’t laugh, even though narcolepsy affects quality of life comparably. I forgot, we’re the ones who are supposed to take a joke lying down.

I will not ask the producers to change their program’s content, but I will ask that they show a brief message at the end of the episode stating that narcolepsy is a real neurological condition and to learn more at www.NarcolepsyNotAlone.com, www.NarcolepsyNetwork.com, and www.WakeUpNarcolepsy.org.

For the narcolepsy community, I challenge you to call your local FOX network, TV station and newspaper and let them know about narcolepsy in light of Homer’s discovery.  We’ve come a long way in raising awareness, but we still have a ways to go, and I need your help. Let’s turn our frustrations into advocacy and awareness!

And last but not least – Homer: please know that you are not alone. Lots of real people have narcolepsy too. Please join the NARCOLEPSY: NOT ALONE campaign and view the true-life rock stars of narcolepsy at www.NarcolepsyNotAlone.com.

More about my love life with narcolepsy and reaction to Homer Simpson news at Women’s Health Magazine.