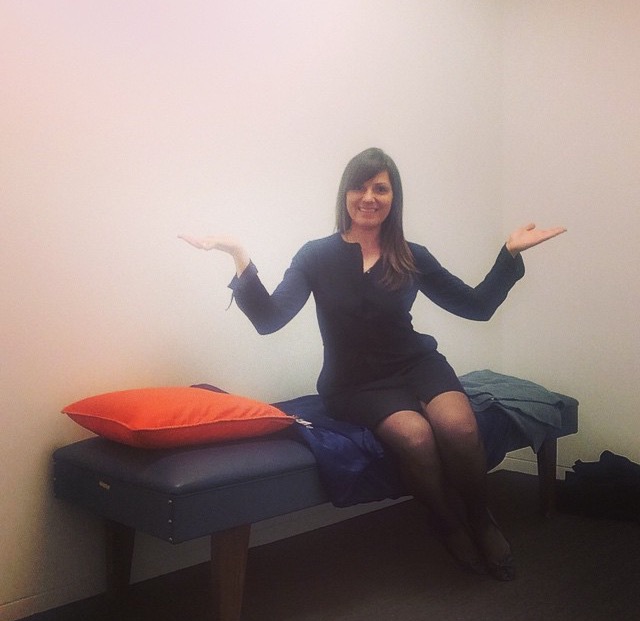 In December 2014, our office moved from Downtown Los Angeles to Irwindale, CA. My commute went from 7 miles to 25 miles. At the same time, our office environment went from private offices to cubicles. To be fair – I was well informed about this before I signed up for the job. (Read Part I of this story first here).

However, before the move, we learned that we would have to park our cars a MILE from the office for the first 3 months, until our parking garage was built. Everyone was annoyed, but the news hit me hard. I wouldn’t be able to sneak away to nap in my car. Frustrated, I said to a co-worker, “I use my car to nap, but now I wouldn’t be able to – a mile away!”

Later, my co-worker mentioned this to my boss.

So one random afternoon, my boss walked into my office, sat down and explained what she’d heard from my co-worker. She recommended I submit the HR paperwork for accommodations to make sure we had everything in order to get what I needed in the new office.

“Plus,” she added, “I don’t like the idea of you napping in a hot car anyway. It could be dangerous.”

Somewhat in shock, I nodded like a zombie and said, “Yeah, sounds good.”

It was a surreal moment. My boss had used the word “we” – like she and I were on a team to secure the accommodations. Once my boss brought it up, I filled out the HR paperwork quickly, knowing I would request a private space with a lock on the door to take one or two short naps daily.

When the HR representative called me to follow up, I explained that I didn’t care how big the room was or if it was used for other purposes (like a mother’s nursing room or storage closet), as long as there was a lock on the door and something to lay on – ideally a couch or recliner, but even just space to roll out a yoga mat would work.

I began this process in early December and the nap room situation was fully resolved by mid-March. So, it did not happen overnight. It was a process. It took a team, communication, coordination and patience.

During this three-month process, I must admit that I was extremely sensitive when discussing the nap room. When my boss mentioned it, I clammed up and couldn’t express myself well. She could tell how uncomfortable I was, especially in meetings with the HR representatives, and went along to make sure I was okay and that I got what I needed eventually.

Still, I cried on several occasions in my cubicle, and after one particular upsetting interaction about the nap room, I couldn’t bring myself to go into work the next day, so I called in sick to calm myself down for a day.

I can’t pinpoint why this was so highly emotional for me. In part, I felt like I was being forced to talk about something I’d rather not discuss at all. I felt exposed and naked, and at the mercy of HR representatives who knew almost nothing about me or my narcolepsy.

As soon as we moved into our new office in mid-December, my boss was on the hunt for a nap room. It never slipped her mind, quite the opposite; she was looking for possible rooms on her own, checking in with HR and helping to move the process forward.

In meetings with HR, we inspected a few room options together and decided on a private phone room that had a lock on the door. A cushioned bench (see photo above) was moved into this room for me. I liked the space and felt surprisingly comfortable napping there.

Then came the comedy of errors. Some issues:

At this point, my patience wore thin. That’s when the advocacy beast in me finally came out of her cage. I met with my boss and my boss’ boss and expressed that while I was so thankful for their support, I didn’t feel that everyone involved was treating my narcolepsy with the urgency and respect that it deserved.

“What if a person with diabetes had insulin stored in a room that got locked for a day? Wouldn’t there be some urgency to open the door? My brain is entering REM sleep inappropriately, a very real neurological process and it demands that I sleep.”

I did not say this eloquently, but I said what I needed to say. Thankfully, I was speaking to two extremely kind people, who LISTENED.

In retrospect, I think the fact that I’d gone six months without a designated nap space made it seem as if I could tough it out. But something in me had shifted. On the days that the nap room was available, I’d re-discovered how invaluable my naps were. Once I started feeling the benefits of napping, I quickly became intolerant of NOT being able to nap. So when the nap room door was locked, my stomach knotted as I walked back to my cubicle, knowing I had to “fight through it” with my eyes open. It was torture.

After this meeting, my boss and boss’ boss escalated things. Later that day, my boss’ boss’ boss who I had never spoken to, sauntered over to my cubicle and said, “I am aware of the situation and I’m so sorry it’s been such a mess. We are going to make this right.”

Again, I nodded like a zombie in shock and said “Ah, ok, thank you.”