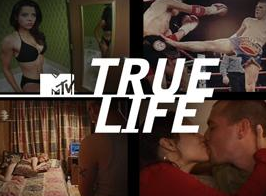 I turned on my TV and cataplexy starred back at me.  I smiled.

The program information for MTV’s True Life “I Have Narcolepsy” described:

Two young women, Julie and Katie, discuss in detail the challenges they have had to endure after being diagnosed with cases of Narcolepsy, which causes extreme sleepiness, and Cataplexy, which causes sudden muscle failure.

Cataplexy in the spotlight? Way to go, MTV!

Cataplexy is a little-known but major symptom of narcolepsy. I lived with it for two years without knowing what was wrong.  Once I found the word cataplexy – my diagnosis of narcolepsy came soon thereafter. But enough about me….

First, we meet Julie, age 16, who began experiencing symptoms of narcolepsy only 4 months prior. She hasn’t explored treatment options yet. Her loss of muscle tone with emotions like humor (cataplexy) is getting worse and her mother worries about Julie’s safety.

What if she falls against a glass door or onto something sharp? On a few cataplexy falls, Julie hurts herself landing in unnatural positions. The danger is becoming very real.

Despite the worsening of her symptoms, Julie is skeptical of the medications available. She fears, rightfully so, that there will be major side-effects.

Next, we meet Katy, age 25, who has lived with narcolepsy with cataplexy since her teen years.  She seems to manage her symptoms fairly well with medications – but her boyfriend Robby sees the negative ways these drugs impact Katy’s life.

Katy decides to try going off of her medications cold turkey to show him the alternative.  Katy’s sleepiness and cataplexy dramatically worsens. She becomes nonfunctional quickly and Robby gets frustrated with her.

I won’t give the rest away – you really MUST WATCH THIS SHOW!

REM Runner’s Review:
It was difficult for me to watch Julie and Katy’s episodes of cataplexy.  Tears streamed down my face.  My stomach clenched with nausea.  It was like watching a car wreck you can’t stop.  Cataplexy has been a part of my life for six years – I should be “used to it,” but it’s still gut-wrenching. You must see it to believe it.

There are treatment options for narcolepsy that can help.  The True Life episode doesn’t highlight any individuals managing their symptoms effectively. This is okay – given the nature of television – but it isn’t the whole picture.

Like most things, narcolepsy is not a one-size-fits-all diagnosis.  Our community is filled with stories of individuals overcoming adversity to do great things.  Some people with narcolepsy maintain high-powered jobs as lawyers, doctors, financial traders, magazine editors, and professional athletes (to name a few).

Over the past four years, I’ve found medications and lifestyle habits that greatly improve my symptoms. It’s a balancing act and no one is perfect – but some are able to manage life with narcolepsy very successfully.

In closing – THANK YOU to MTV True Life for shining a bright spotlight on untreated narcolepsy and cataplexy! Also, THANK YOU to Katy, Robby and Julie for bravely opening up their lives to raise awareness.  Their efforts inspire me.

MTV’s Press Release about narcolepsy episode:
On this episode of True Life, you’ll meet two young people who suffer from Narcolepsy, a neurological disorder that brings on overpowering sleep spells, and Cataplexy, a condition associated with Narcolepsy that causes sudden muscle failure. Julie, once a thriving high school student began to fall victim to Cataplexy attacks, causes her muscles fall asleep resulting falls to the ground unexpectedly several times a day. She is no longer able to drive or participate in activities like dance class for fear that her body will not function properly. Medications are an option but Julie fears that the potential side effects could be just as disabling as the maladies themselves. Viewers also meek Katy, who after suffering from Narcolepsy for nearly a decade, controls her affliction with an ever-increasing slew of pills causing adverse side effects. Katy’s boyfriend begins to fear that the amount of medication she’s taking could be harmful to her health and is urging her to stop using them cold turkey. Weaning off medications cause her to return to return to overwhelming sleep attacks. Katy must find a balance that will keep her healthy and happy.