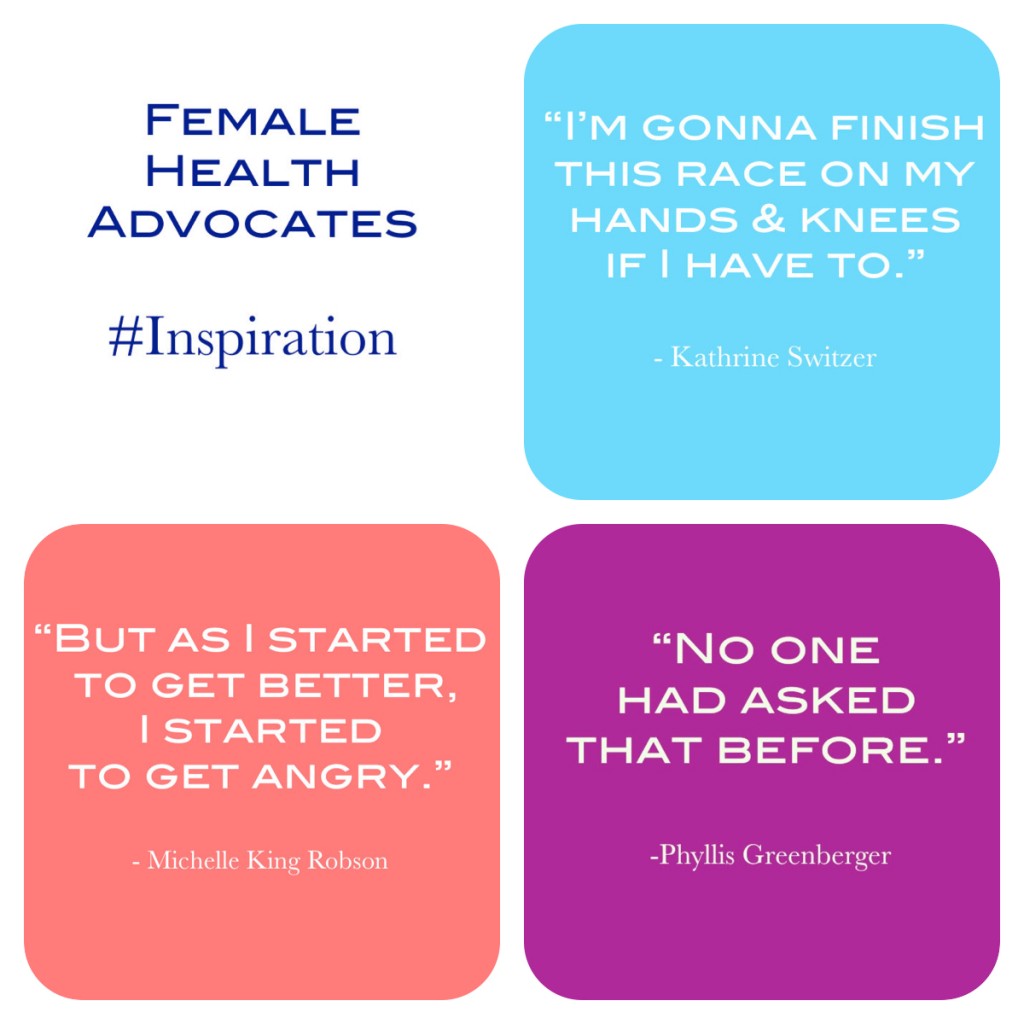 In honor of Women’s History Month, I am profiling nine female health advocates who inspire me to follow my dreams.  These women are trailblazers – leading the way for other women to optimize their health and triumph over adversity. Here are the first three: 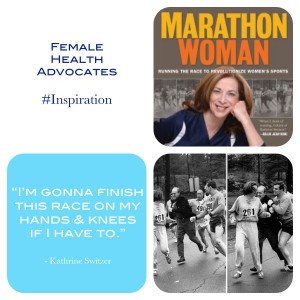 Less than 50 years ago, women weren’t allowed to run the Boston Marathon. At age 19, Kathrine Switzer officially entered the 1967 Boston Marathon under the name “K.V. Switzer” to remain gender-neutral. When the race director found out a woman was running, he tried to forcibly remove her from the race.

She recalls, “He grabbed me and screamed at me, ‘Get the hell out of my race and give me those numbers.’ He started clawing at me, trying to rip my numbers off me… He had the fiercest face of any guy I’ve ever seen. Out of control, really. I was terrified.”

Switzer’s boyfriend (an All-American football player) protected her, side-checking the race director away. After the altercation, Switzer continued on to complete the marathon in four hours and 20 minutes and became the first woman to run the Boston Marathon in 70 years.

In 1972, five years later, women were officially allowed to enter the Boston Marathon. In 1974, Switzer won the New York City marathon, and a year later, set her personal record (an impressive 2:51) in Boston. Later, she successfully advocated for the women’s marathon to be included in the Olympics.

It takes courage to run a marathon – but to take on Boston as the lone female while fighting off angry officials – now that’s true valor. She was terrified but she kept going… As a female runner confronting fears with narcolepsy and cataplexy – I am beyond inspired by Switzer’s groundbreaking role in our not-so-distant history.

At age 66, Switzer is a published author and still running marathons. She plans to take on Boston again in 2017 to honor the 50th anniversary of her momentous run. Go, Kathrine, go! 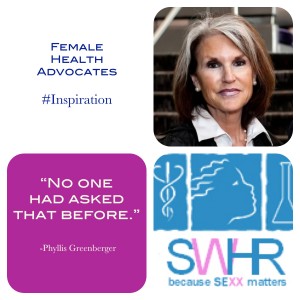 Twenty years ago, most medical research focused on young, healthy, white men. Women were believed to be “little men.” Phyllis Greenberger set out to change this. As the President and CEO of Society for Women’s Health Research (SWHR), she’s paved the way toward understanding the crucial genetic and biological differences between men and women. In her words, “Sex matters.”

In her TED talk, Greenberger describes, “In 1990, my organization, SWHR, raised the question, ‘How do we know that research that’s been done predominately on young healthy white males can be extrapolated to females?’ Well, that was met with a fair amount of diversion from the medical and research community, because research had been done like that since the beginning of time and nobody had questioned it.”

Greenberger’s strong leadership of SWHR has changed the face of scientific and pharmacological research. Scientists now recognize that women are different from men, and that research into drugs, diagnostic tools, and treatment must be tailored to meet women’s needs too.

Yet Greenberger is not resting on her laurels. She continues to work towards change, stating, “I don’t know about you, but I’ve never seen a label on a pharmaceutical that has made a distinction between men and women except saying, ‘If you are pregnant, don’t take this.’ So we obviously have a long way to go.” 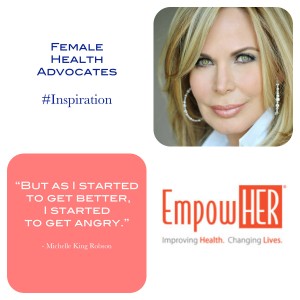 At age 42, soon after having a complete hysterectomy, Robson noticed her quality of life decline. “I became a different person,” she describes, “I didn’t like myself. I had no energy. I was seriously depressed and even contemplated taking my own life.”

After a year that included 12 different doctors and nine different medications, Robson wasn’t getting any better, making her even more depressed.

Eventually, a good friend sent her a book entitled “Screaming to be Heard,” by Dr. Elizabeth Lee Vliet. It was about how women suffer silently, hiding thier pain and letting it fester inside. Luckily, Dr. Vliet lived near Robson and the two were able to meet. Dr. Vliet weaned Robson off of her medications and started her on Estrogel and Magnesium. After just a few days, she started feeling better.

“But as I started to get better, I started to get angry,” Robson recounts, “I thought, ‘If I was in so much pain for so long, even with the best medical attention in the world, what are other women going through?’ That is why I started EmpowHer.com, the resource I wish I had when I was sick.”

Just five years later, EmpowHER.com is the third most visited women’s health and wellness destination on the Web – providing women with access to health and wellness information, world-class medical resources, and a dynamic community of experts and advocates committed to their well-being. “It’s a place for women to ask, share and connect.” Under Robson’s leadership, EmpowHER is at the forefront of technology’s intersection with health advocacy.

Meeting Michelle was a highlight of my year (videos here). Michelle is SO present in our every conversation – listening and responding thoughtfully. She’s passionate, intelligent and impeccable in her word – I’m honored to call her a friend and role model.