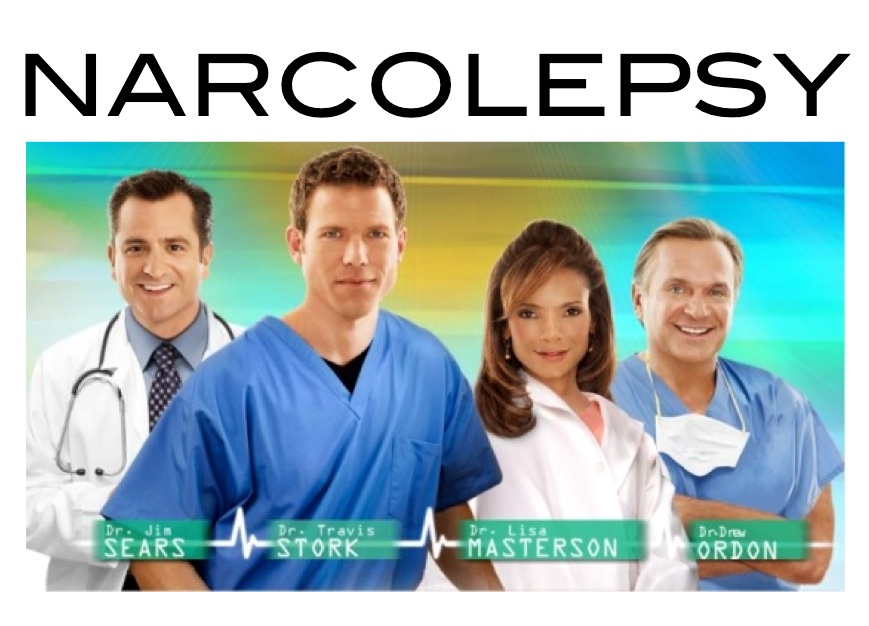 On Thursday, May 22, 2014, narcolepsy will be featured on The Doctors Show. Please check for local listings here. As a narcolepsy spokesperson and author of Wide Awake and Dreaming: A Memoir of Narcolepsy, I’m so thrilled that the Doctors Show will highlight narcolepsy on TV. Thank you to my brave and beautiful friend and co-advocate, Letha for working hard to raise awareness! 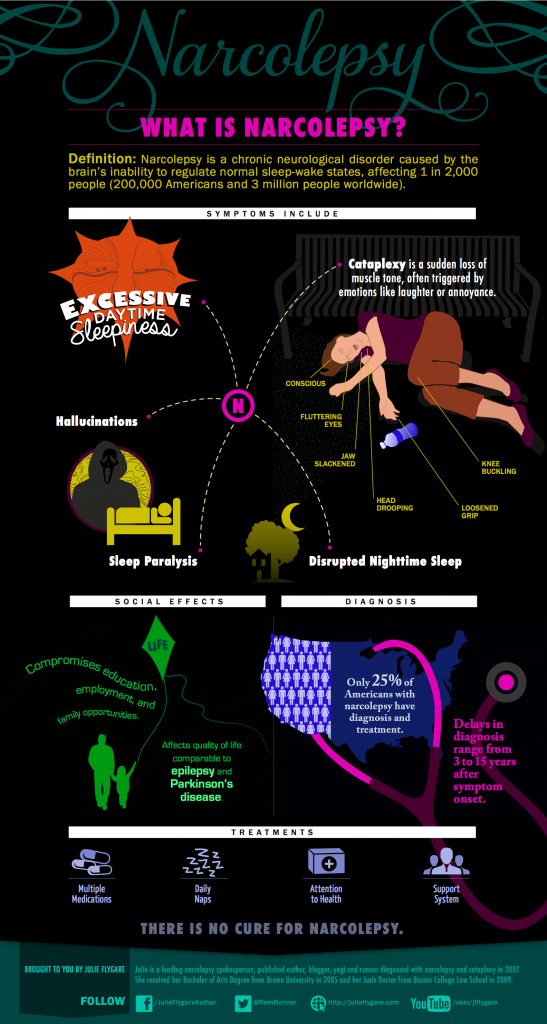 What is narcolepsy?
Narcolepsy is a neurological disorder of the sleep/wake cycle affecting 1 in 2,000 people including 200,000 Americans and 3 million people worldwide.

Could I have narcolepsy?
Learn more about the REAL symptoms of narcolepsy here:

What kind of doctor should I see about narcolepsy?
If you suspect that you or a loved one might have narcolepsy, consult a sleep doctor or neurologist who is familiar with narcolepsy. To find a sleep specialist near you, visit AASM website and Narcolepsy Link.

10 Things You Didn’t Know about Narcolepsy:

10. It’s not like the movies
Rat Race, Deuce Bigalow: Male Gigolo and Moulin Rouge feature comical characters with narcolepsy. Falling asleep mid-sentence may happen in real-life, but it’s not the typical everyday experience. Narcolepsy is more than sleepiness, involving other serious symptoms and it’s not a joke.

9. People with narcolepsy do NOT sleep all the time
Individuals with narcolepsy may fight sleepiness during the day but be unable to sleep at night. “Disrupted nighttime sleep” is a major symptom of narcolepsy.

8. Emotions may cause paralysis
Everyday emotions like laughter, surprise or annoyance may cause temporary muscle paralysis (knee-buckling, head dropping or collapsing to the ground unable to move). This is cataplexy, a scary symptom unique to narcolepsy. (Not everyone with narcolepsy has cataplexy.) 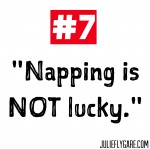 7. Napping is not a luxury
People with narcolepsy are not “lucky” to take naps, they are experiencing extreme physical sensations. Napping is often inevitable, unwelcome and difficult to plan for in most school or work settings.

6. Terrifying Hallucinations
Ever woken up but been unable to move your body? This is sleep paralysis, which happens to 1/3rd of all people, but happens morefrequently in narcolepsy. Sometimes accompanied by visual, auditory or tactile hallucinations as REAL as reality. This redefines “living a nightmare”.

5. Doctors don’t know narcolepsy
According to a recent study, 91% of primary care doctors and 58% of sleep specialists are NOT COMFORTABLE diagnosing narcolepsy. Only 22% of sleep specialists could name all five major symptoms. As a result, people go undiagnosed for 3 to 25 years.  Misdiagnoses include epilepsy, depression, and schizophrenia. 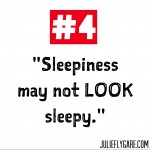 4. Sleepiness doesn’t always LOOK sleepy
Narcolepsy’s sleepiness may manifest as hyperactivity, irritability, moodiness, attention deficits, fogginess, or memory problems. Thesebehavioral and cognitive changes are very real, but not what we think of “sleepiness” – i.e. droopy eyelids, yawning or nodding off.

3. Neurological disorder without a cure
Narcolepsy is believed to be an autoimmune neurological disorder, caused by the gradual loss of neurons (called hypocretin or orexin) which help regulate waking, sleeping and dreaming. There is currently NO cure or replacement for the lost neurons. Patients manage with multiple medications and diligent attention to their health and schedules. No two cases of narcolepsy are exactly alike – what works for one patient may not work for another. 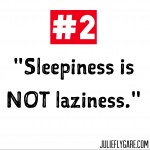 2. Sleepiness is NOT laziness
Imagine not sleeping for 2-3 days straight. That’s how a person with narcolepsy feels daily. This sleepiness is neurological and uncontrollable and is not a sign of laziness or lack of will power. If I felt like being lazy, I would watch TV or play games. Sleep is not all that fun, I don’t even remember it.

1. You know someone with narcolepsy
Narcolepsy affects 1 in every 2,000 people – 200,000 Americans and 3 million people worldwide, including many children. Narcolepsy is invisible, we may look “healthy” on the outside while fighting internally or behind closed doors. Misperceptions cause many to keep it private. Yet, people with narcolepsy are your friends, neighbors and colleagues. Meet the real superstars of narcolepsy here. 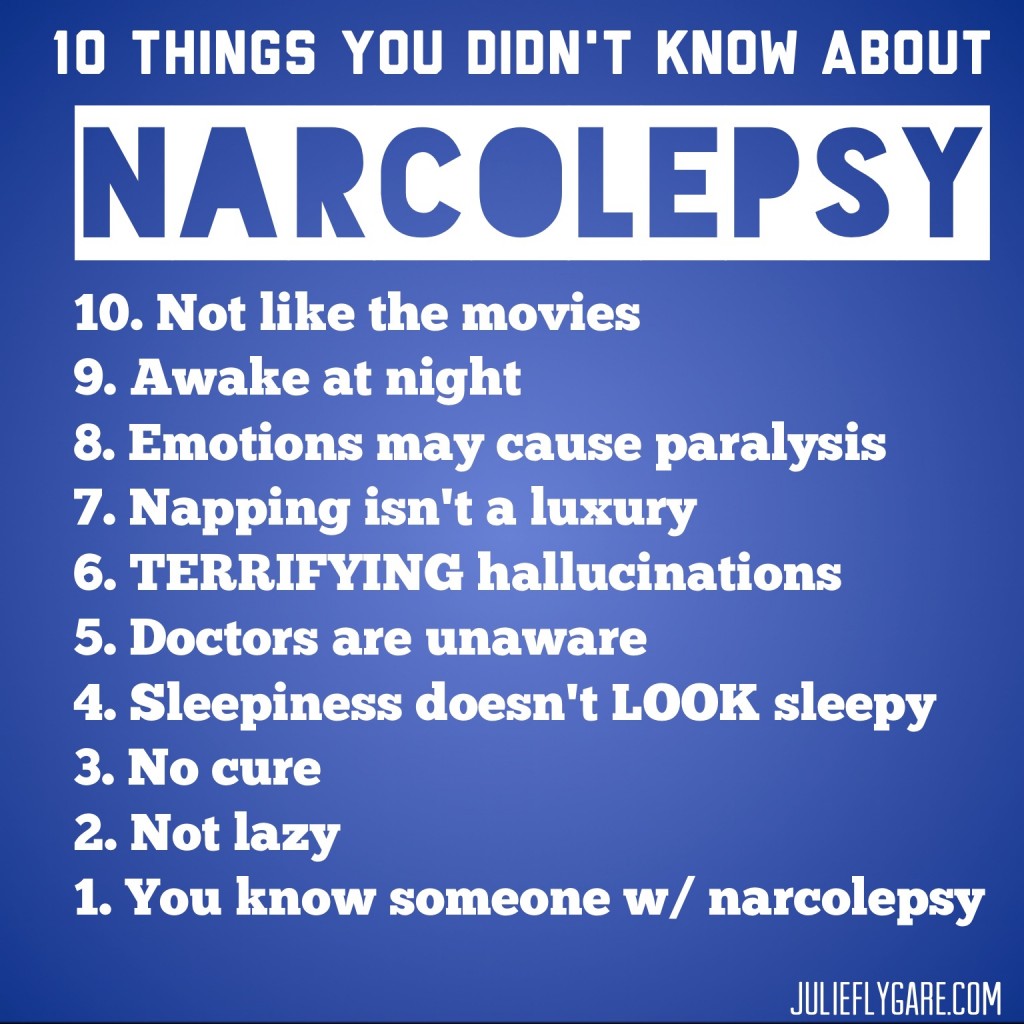