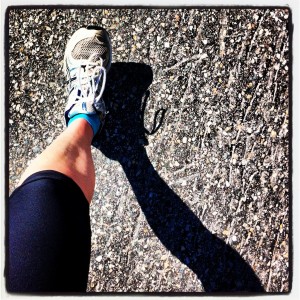 I started this journey with a broken heart; I felt lost and alone without my Dad. I wanted so badly to re-connect with him on the mountain. While training, I faced fears and trampled over my comfort zone many times. I gained support from people near and far. By race day, my heart was filled with love and support I’d never imagined. 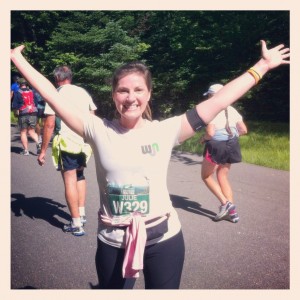 The morning of the race, my stepmom Kathy asked, “What’s your worst fear?”

“Dying. Besides that, who cares?”  Low expectations calmed my nerves.

After getting my bib, I was excited to meet Tom Raffio, CEO of NE Delta Dental (MWRR event sponsor) and thank him for my registration!  Next, I met up with Erin, the daughter of Byron who ran the race with my dad in 1972. We honored our fathers and our families’ 40-year-long friendship by crossing the start line together at 9am!

Taking off, the summit was visible in miniature up in the clouds. I shook my head and chuckled. You must laugh at yourself when attempting something so ridiculous! Less than a mile into the race, my shirt was drenched in sweat.  Thankfully, runners started walking early on. I joined in. “Slow and steady. No one to beat, nothing to prove.” 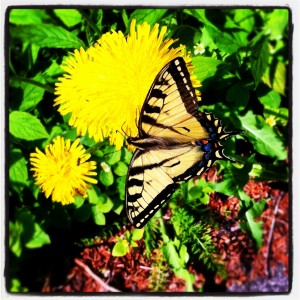 Between mile 2 – 3, the vistas became breath-taking.  Mt Washington is known for having “the World’s worst weather.” Saturday was one of the *lucky* days when the fog cleared and visibility extended 100 miles.  I’d like to think my dad helped with that!

I breathed in the succulent fresh mountain air and smiled deliriously (probably annoying to fellow runners in agony). My calves burned, but I took every opportunity to laugh, smile, take pictures, and yes, I stopped to smell the flowers! 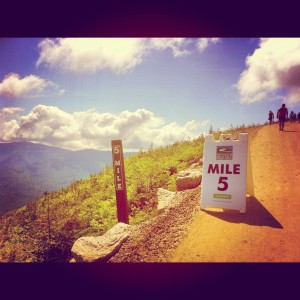 Somewhere between mile 6 -7,  I thought, “I was meant to be here, climbing this mountain, feeling free and strong, on top of the world! “  This joyful realization came at a price: to believe that this was “meant to be” also meant that my dad’s passing was “meant to be,” as I never would have been here otherwise.  To hold devastation in one hand and glory in the other was a strange handshake with real life.

Crossing the finish line, I broke down into sobs and almost hyperventilated. The medical staff’s eyes were on me like hawks. I was fine physically but overwhelmed with emotions. My Brown squash coach always said he could never tell if I won or lost a match because I cried either way. This was one of those moments. 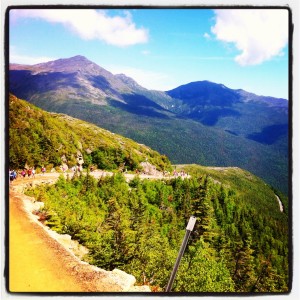 I successfully finished the Mt Washington Road Race 2012 in 2 hours and 11 minutes. In 1972, my dad and Byron finished  in 1 hour 34 minutes. I still can’t really believe I did it, but I’ve checked the official results a few times and my name remains on the list!

Ironically, my fear of dying was put to the test on the post-race drive down the mountain. Despite my confidence in Byron’s driving and his car’s brakes system, the lack of guardrails was much too much for me. I’m very Zen when flying (rationalizing that my fear of dying won’t stop it from happening in these circumstances). I wasn’t quite so Zen in the car Saturday. I couldn’t accept dying here , oh no, I had photos to share and blog posts to write, people!!

This race brought me closer to my father, but also closer to myself and the world around me. My own limitations melted before my eyes. I can’t explain how it happened except to explain this: 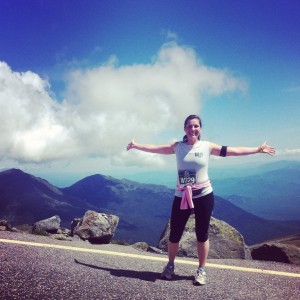 When pursuing something outside your comfort zone – ignore all nay-sayers & dream-squashers. Careful, our biggest critic lives in our own heads – running on repeat reminding us, “You, Julie Flygare, do not deserve to fly.”  Don’t listen.

Believe that there is a force in you, built of everything “good” and “bad” in you, that is just getting started. Believe that if you keep putting one foot in front of the other, you will someday take flight. No one else can throw you into the wind, but the world will rise up to support you once you’re on your way.

I believe this because it happened to me. I do deserve to fly. Flygare is Swedish for flyer/aviator afterall. It’s in my blood. I was born to fly.

Thank you to my donors: together, we raised $3,050 towards a cure for narcolepsy! Special thanks to: NE Delta Dental, Tom Raffio, Debbie, Lawrence, Kathy, Bette, Byron and Erin.