It was not out of strength or courage that I began this journey. In the months following my diagnosis in the fall of 2007, I struggled to find a balance between my symptoms and medications. I hated narcolepsy so much I wanted to crush it. Approaching this problem as any competitive athlete would, I was determined to win, even though I had no idea how I’d do that.

During these first few months of adjustment, I usually stayed at law school studying late into the night before driving home to sleep. On these late-night drives home – behind the tightly-sealed ducts of my car doors and windows – I got in the habit of screaming at the top of my lungs.

I don’t know where exactly the fire in me began, or how is spread to burn so fiercely. It was as if I was infected with rabies or possessed by a malevolent spirit. Although it was still “me,” I didn’t recognize this self – it was a person I’ve never been outside of those few months.

By December of 2007, I reached the end of my rope. One day, I was attempting to study for my exams in the library but I felt so unwell that I wasn’t being productive. Sitting in the silence of the library wasn’t helping either, so I headed out to my car.

It was down-pouring rain outside. I looked out on the campus, desolate small groupings of trees and rocks, roots and mulch, no leaves on trees – the slumber of winter all too apparent. There was no beauty here, only deadness.

Inside my car, I didn’t turn it on. I just sat there like dead-weight and cried. I knew that going home wouldn’t make me feel better either; there was no escaping how down I felt – both physically and mentally.

After a few minutes, I decided to call my dad to vent. Of course, I wished he could take this pain away from me but I knew that he couldn’t. He listened patiently to my complaints and then replied, ever so calmly, “I’ve been thinking of you these last couple days because I’ve been put on a new medication that’s been making me feel sick.” He continued, “So I see now what you were saying about medication that’s supposed to make you feel better making you feel worse in other ways.”

I was sorry to hear that he was feeling unwell, but I couldn’t help but laugh – as my dad and I were bonding over the grunt-work inside prescription orange pill bottles. I never thought that this is what we would commiserate about – the well-respected lawyer and his superstar law school daughter – his “Fabulous Jules.” We’d both been brought down to size by malfunctioning body parts and strong medications.

Next, he said, “I’m sure that this experience will make you stronger, Julie. It’s hard now, but I believe that it will make for a greater life. You will rise above.”

I agreed with him, even though I couldn’t see how it would happen. It was nice to have someone believe in me so much; someone who cherished my life for exactly what it was – pain and all. We continued talking for almost an hour before my phone battery died. I was much more at peace after talking with my Dad. He felt very close to me – our words, emotions, laughter, and even the pauses were filled with love and acceptance.

Soon after that day, I stopped screaming in my car. Eventually, I found actual words to describe my experience instead of barbarian roars.  Over the next couple years, I used these words to open up about my experience and found productive ways to “fight” narcolepsy .  I’ve been overwhelmed by the support I’ve received from friends, family, and strangers alike. I know in my heart that this experience has made me stronger and that it was all meant to be.

Yet, I will never forget that phone call with my dad. Ever since that day, I never felt alone. The support of my dad was enough to carry me out of my lowest point – I was drowning in sickness and sadness and my dad tossed me over his shoulders. His health was weak too, yet he gave me all his strength to stand on. We moved slowly, my dad and I, out of the darkness of that December. 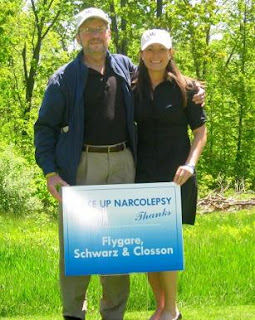