Today in the mail I received official notice from the Boston Athletic Association confirming my acceptance into the 114th Boston Marathon on Monday, April 19th, 2010! So it’s actually happening, this 26.2 mile run of mine. 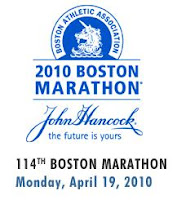 I ran 14 miles last week, and although it went smoothly – it’s hard to imagine that this was just a little over half of what I will run in April. And although I’m still on board, I’m beginning to sense that there’s something rather over-the-top dramatic about marathons — they’re like epic battle movies or six hour Wagner operas.

Frankly, I’m not sure humans were meant to go about running 26.2 miles here and there. What in the world compelled people to start doing this? And more importantly, what am I, Julie Flygare, doing mixed up in this crowd?!

Well, I suppose I like a little drama in my life. I enjoy testing my limits every once in a while, and as I’ve said before, I certainly wouldn’t be doing this if it weren’t for my desire to raise awareness and funds for narcolepsy…But still, I have moments of panic. Am I in over my head?

In closing, here’s one of my favorite quotes about writing that I think may be just as applicable to running a marathon:

“It’s like driving a car at night. You never see further than your headlights, but you can make the whole trip that way.”       -E.L. Doctorow