(Note to reader: This is a continuation of my last blog post. To read Part I, click here.)

On July 10th, 2007, I returned to my school’s health services to meet with the sports medicine specialist about my “runner’s knee,” an issue that had developed over the last couple months.

Athletics had always been an important part of my life and my first year of law school was no different. Exercise was my break from “lawyer college” – a small slice of sanity I clung tightly to. By spring of 2007, I was running 7 miles twice a week, in addition to 3 or 4 mile runs on my “off” days. I also played squash a couple times a week. I may have been in the best shape of my life that spring and perhaps I ran myself into the ground.

At some point, I started to feel a sharp pain under my right knee. At first, I tried to just run through it, hoping it would just go away. Unfortunately, the pain didn’t go away, it did the opposite – it got worse. By June, the pain came on almost immedeately when I started running and lasted the entire workout. Next, I tried staying off it for a week, then two weeks but each time I went back to running, the pain returned like an unwelcome house-guest.

By July 10th, I was anxious to meet with the sports specialist. As crazy as this may sound, part of me thought that the knee-pain was the root of all my other problems. If only I could get back to running 20-30 miles a week, then maybe I would feel better… And maybe my sleepiness would go away… Unable to find any better explanations for why I felt so “off” that summer, my “runner’s knee” took a lot of the heat.

The sports medicine specialist was a younger female doctor. Pleasant, but all business – she conducted a thorough examination – twisting and turning, flexing and pointing, standing and sitting. And all the time playing a game of 20 questions. Somewhere in the midst of this intense, almost ritualistic examination, a question took me by surprise:

“Do your knees ever give out on you?”

I expected we’d continue on with her next rapid-fire question. But when I looked up at her, she was looking right back at me; apparently it was still my turn to talk. So I began telling her the same ridiculous tale that been telling friends and family members over the last year. The same crazy story I’d been painfully repeating in hopes that someone else knew the feeling – the falling inside my knees. (I described this more thoroughly in an earlier post, “Dangerous Laughter“)

“When something is funny, my knees give out on me slightly, as if someone hit me behind the knees, but then they catch themselves and quickly straighten up again. The incidents are getting worse – it’s a much bigger dip now…”

At first, the doctor looked at me like everyone else. But then she asked me to tell her more, and as I rambled on, she looked at me differently. It wasn’t her specialty but she thought she’d “heard of something like that before.”

She twirled around in her chair to face a clunky black and white computer screen. Sitting on the examination table just behind her, I read over her shoulder – my curiosity was uncontrollable. She hit only a few keys on the keyboard and I’ll never forget what I read “…loss of muscle tone….with emotions, such as laughter…” That was it! It was as if the words had been written exactly for me.

She wrote one word, like this —  “cataplexy(?)”on a piece of scrap paper and told me to look up when I got home. She also said she’d be happy to refer me to a neurologist about this if I wanted. And then, we went back to talking about orthotics and stretching.

Leaving health services, nothing was truly definitive – I needed x-rays on my knee (that would later lead to a diagnosis of tendonitis and a frustrating expedition into the world of physical therapy). But there was a bounce in my step as I hurried to my car – I held this new word “cataplexy” in the palm of my hand.

Back in my apartment, I went online to look up cataplexy. I linked to a Wikipedia definition:

“A loss of muscle tone with strong emotions, most commonly laughter. Only found in people with narcolepsy.”

However, as I read more definitions and visited more websites – everything began to make sense. Turns out cataplexy is a symptom of narcolepsy, so I probably had “narcolepsy with cataplexy.” And narcolepsy wasn’t the joke I originally thought it was. This was like hitting two birds with one stone. I shook in the silence of this lonely self-discovery.

This was one of the most overwhelming and underwhelming experiences of my life. On the one hand, it was as if someone was holding a mirror up to me, showing me the last couple years of my life from a totally new perspective. Another prominent symptom of narcolepsy is “hypnagogic hallucinations” and reading more about these, I realized that I’d been experiencing these for a few years now but had been brushing them off as some “really bad dreams.”

I’d never connected the bad dreams to the sleepiness or my knee-buckling laughter. These were some of the most random parts of my life coming together under one word – narcolepsy. Three birds with one stone. Narcolepsy… Really? (And I’d later find out that my unexplainable weight gain was probably linked to my narcolepsy as well. Four birds – one stone.)

However, on the other hand, this discovery was as meaningless as a horoscope or fortune cookie. At the time, I didn’t know that this was just the beginning of a much longer journey. Knowing the right words meant that I was not the only one. It made it real. But I also assumed that it made it better. I thought I’d just solved the puzzle, and now making it go away would be the easy part. 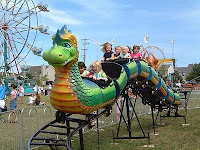 I thought I’d just been on the rollercoaster. I didn’t know that the truly mind-boggling, upside-down spinning, nauseating, big scary roller-coaster was still yet to come. Silly me.
I’d never had a rare disease. I’d never been an unprofitable investment for a pharmaceutical company. I’d never taken medication that made me better in some ways and sicker in other ways. I’d never known what it felt like to have no better options.
So even though this concludes my personal episode of grey’s anatomy, and I’m rolling the credits now to profusely thank the sports medicine doctor for cracking the case, I’d like to remind you that, for me, this was just the kiddie-coaster. Learning to live with narcolepsy has been the much bigger and scarier ride. 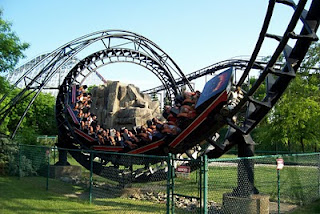