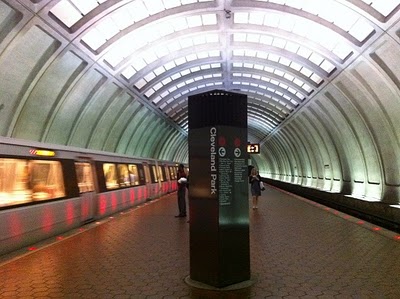 There were no seats – the Metro was crowded. I grabbed hold of  a metal bar for balance. As the train jerked into motion, my legs wobbled in the undertow of the train’s push forward. Weakness set in.

My joints began to ache and a wave of nausea washed over me. I shrugged my shoulders and stretched my neck from side to side – trying to dislodge the discomfort swelling inside. I know this feeling all too well – it was the beginning of something much bigger; it was the first step into the spiral of sleep.

I looked myself over in the reflective dark Metro window. My blue collared shirt was still neatly tucked into my black pencil-lined work skirt. My long brown hair fell against my shoulders as I like it. Everything looked perfect on the outside, yet when I looked directly into my big brown eyes, I knew their pain.

It was just past 7pm and I only needed to make it six stops on the Metro.  Thankfully, trying to keep my balance kept my mind from falling into the gutter. The stops rushed by; I swam in a sea of doors opening and closing, announcements being made, people coming and going.

Finally, my stop arrived.  Yet, as I exited the train, I couldn’t recall why I thought this was my stop. Had I heard an announcement? I frantically scanned the waffled cement walls for a sign indicating the name of the station.

Here in the depths of the dark concrete cave of the Metro’s underworld, I was losing touch with myself rapidly. Thoughts and images slipped through intellectual quick-sand. I kept pausing – unsure of where I was going.   “You’re in the Metro Station, Julie,” I reminded myself, re-joining the swarm of passengers exiting in mass. 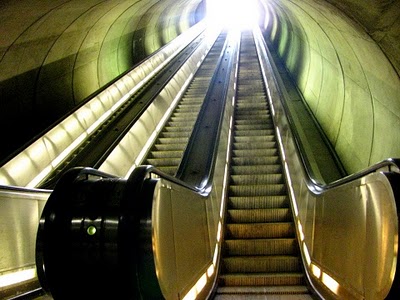 I don’t remember swiping my Metro card to exit. I don’t remember the escalator ride up to Earth’s surface, but this all must have happened because I soon found myself standing outside the Metro station, starring at the line of buses parked along the side-walk. My bus was parked at it’s designated spot. This was lucky, as my bus comes about once every 30 minutes. I continued forward, like a zombie, onto the bus.

Thankfully, there were plenty of open seats. I joyously flung myself into the embrace of a bright blue shiny plastic chair, like an angel falling into a soft cloud. The bus driver stood just outside the bus, chatting with a co-worker. That’s the last thing I remember thinking before my head abandoned me.

Next, came a black spot in time – a silence – a disappearance in my mind. At some point, the bus driver started the bus. I remember the engine revving up. I remember thinking, “I need to wake up before my stop, but not right now…”

I think this crossed my mind. I think I heard a few stops go by…

A few minutes later, I opened my eyes and saw a plush green recreational field with people playing soccer under bright lights. It was a beautiful scene – green grass and people enjoying themselves. I closed my eyes again. I held no control over this, I was sucked back in a vacuum. There was no fighting it. My head rushed back into darkness.

When I opened my eyes next, I saw children – four of them. They rushed down the center aisle of the bus quickly. At the front of the bus, their mother stood with a baby stroller. “Find seats!” she said to them. The four young children looked around frantically – there were seats, but none together. They would need to split up.

Still very sleepy, I reacted slowly, asking myself, “Should I stand and let them sit in my seat so they can sit together?” I didn’t take action, as my eyes closed their windows on me again.

“Just sit somewhere!” the mother yelled out sternly. The children quickly split up and all sat next to random strangers.

“I should’ve given them my seat,” I thought, “my stop is coming up soon anyway…”

And then, I looked outside the bus. It was dark, so I couldn’t easily make out the streets and houses. “Where am I?” I thought.

The bus’ automated female voice, as if hearing my question, quickly answered back, “47B. To Farragut.”

Farragut? This isn’t my bus!  And at that second, we passed by a grocery store, which also was not on my bus route. I leaned forward and tugged at the yellow “Stop Requested” cord. Two blocks further down the road, the bus rolled to a stop, and I exited onto a dark unfamiliar street corner.

There were plenty of people and cars around. I didn’t feel unsafe, I mostly felt ashamed and annoyed with myself.  A sleep attack had come at a very bad time, and as a result, I got on the wrong bus and ended up in unfamiliar territory.

Thankfully, I recently upgraded to a “smart phone” so I used the navigational feature to find myself. I was about 3/4 mile down the road from where the bus started.  I followed my phone’s map back to where I’d begun and waited for the correct bus.

I made it home safely, even if it took me about an hour longer.  Could my sleep attack have put me in danger? Perhaps. I do my best to be careful and conscientious, but I am not perfect. Narcolepsy continues to challenge me in many ways.  I may appear “perfectly fine” on the outside, yet there is a lot going on below the surface.