Hollywood’s portrayals of narcolepsy are notoriously inaccurate. For one day, the script was different, thanks to Suffering the Silence, AwesomenessTV and Visible. I was so proud to represent narcolepsy in this cool new video!

The morning of the Suffering the Silence filming and photo shoot, I arrived at the fancy AwesomenessTV studio in Hollywood with wide eyes. It was hard to believe that I, Julie Flygare, was supposed to be here.

Entering the studio, I was excited to meet up with Erica Lupinacci and the four other “models” for the day – amazing women with chronic conditions including Madison, Gianna, Siobhan and Stephanie. 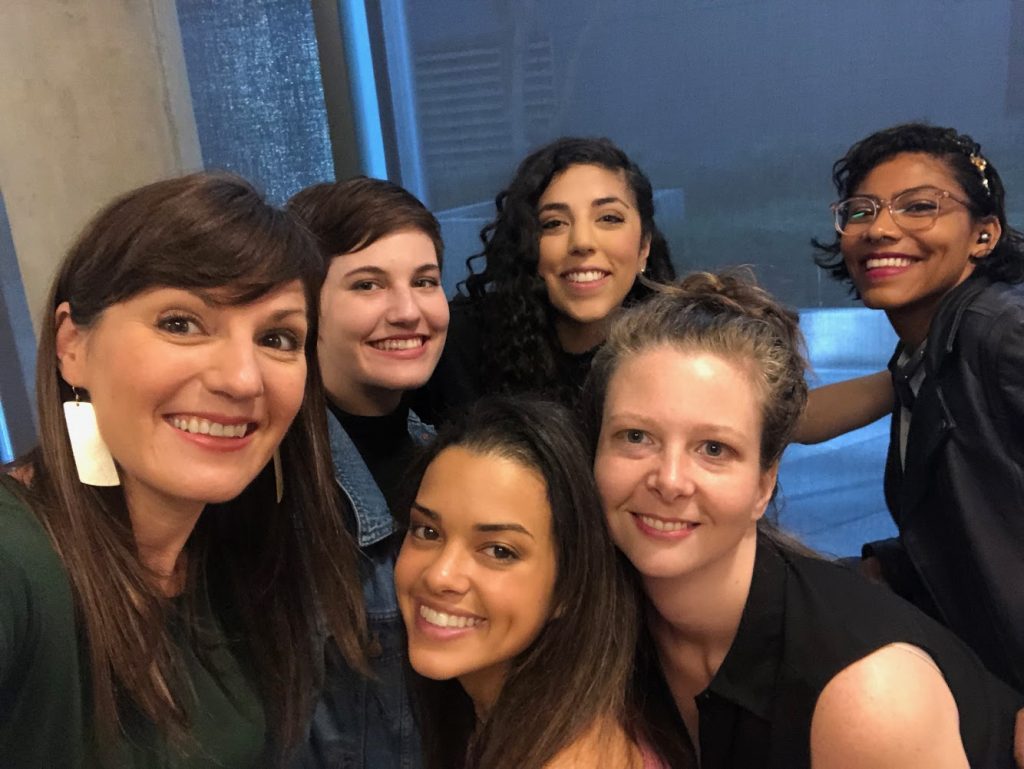 To be honest, going into this day, I’m not sure I fully understood what we’d be doing, but if it had to do with Suffering the Silence, I was in!

When I first saw the original Suffering the Silence campaign a few years ago, it took my breath away. Quickly, I added my photo and posted about it here. 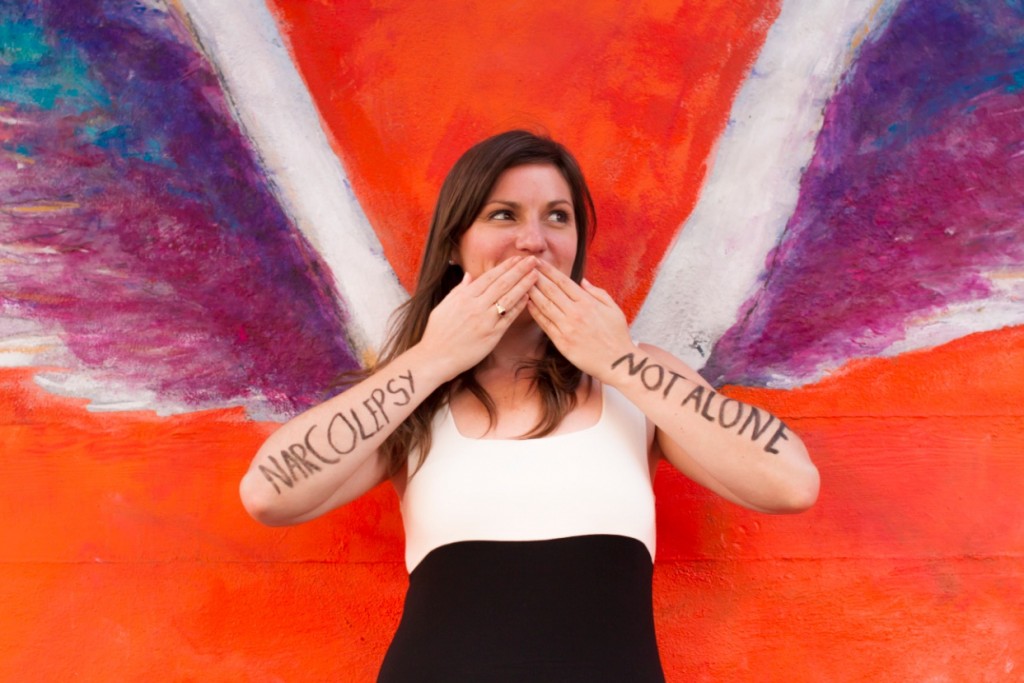 Since then, I’ve been lucky to get to know the leaders of Suffering the Silence, Allie Cashel and Erica Lupinacci, and I’ve loved watching their movement grow into a 501(c)(3) organization accomplishing innovative work in the chronic illness space. Allie and Erica are rare gems- authentic, articulate, professional, and in tune with young adults living with chronic conditions across America.

I attended Allie’s book reading a few years ago and was honored to read from my own memoir at a Suffering the Silence event last year in LA, meeting other talented writers with chronic conditions. So when Erica invited me to participate in this Hollywood filming/photo thing, I said YESSSS right away! She had me sold at “hair, makeup and wardrobe provided.”

Truly, this whole day was a treat. The hair, makeup and wardrobe stylists were incredible. I know it sounds cheesy but I honestly felt really pretty! I felt both myself and so not myself because my look was SO GLAM, including bright lipstick, fake eyelashes, and a pleather skirt (all lifetime firsts for me).

Meeting our hosts, Alyson Stoner, Ricky Thompson and Aaron Burriss was very special. I don’t keep up with pop culture, so I wasn’t familiar with these talented individuals before this day, but spending time with them was still very neat.

The day flew by in a whirlwind of glamming, changing outfits, filming, and chatting. As an introvert, I value quieter conversations, so most of my favorite moments were not on camera. 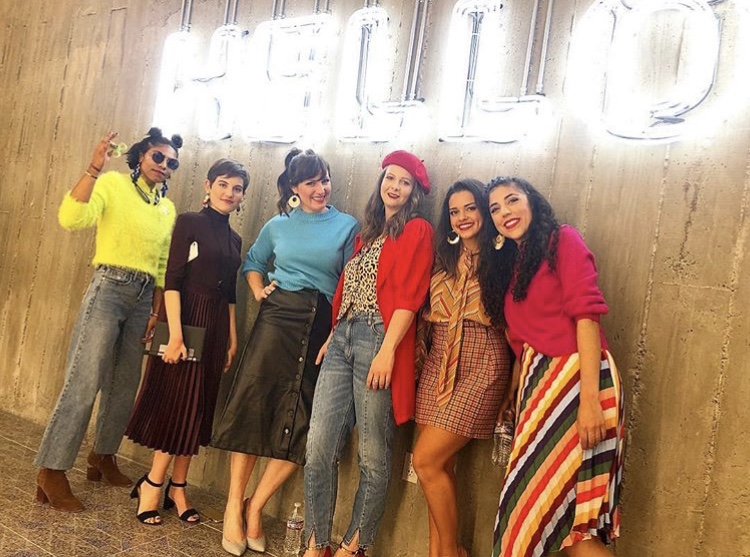 Late in the day, it was time for the grand finale photo shoot! I was actually the first model to step in front of the cameras, lights and shimmering purple backdrop.

As the crew finalized lighting and microphones, I took a moment to hit the “pause button” on this surreal moment. I looked around me with intention, soaking in this scene – the people, the positive energy, the feeling of being in my own skin and yet embodying a more bad-ass version of myself.  And then the cameras started rolling….

Although I carefully planned what I was going to say as my “small victory,” I somehow FORGOT to think of a corresponding movement to exemplify that small victory. Since I went first, I had no other movements to compare to or draw from. Thinking quickly on the spot is NOT my best quality.

I felt my energy begin to shift – I was clamming up. Yet, the environment was so supportive and special, I didn’t WANT to clam up. So, I saw my fear and I chose to step directly over it, surrendering myself entirely to the moment, not knowing where it would take me. I let go and I guess my head swung around, moving in a way I never had before. 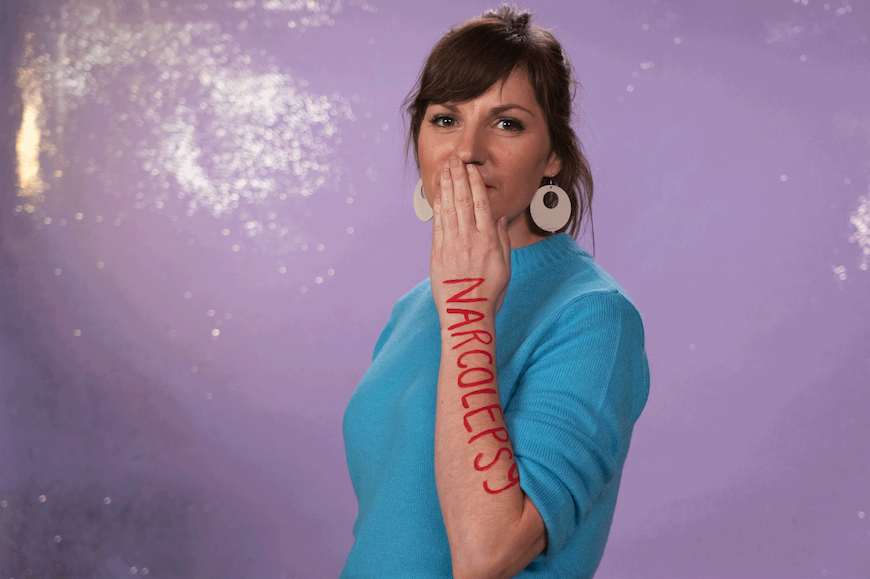 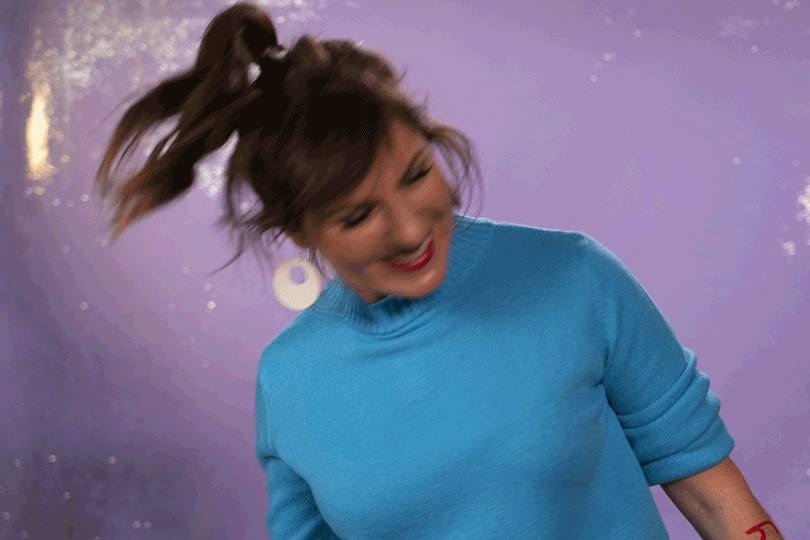 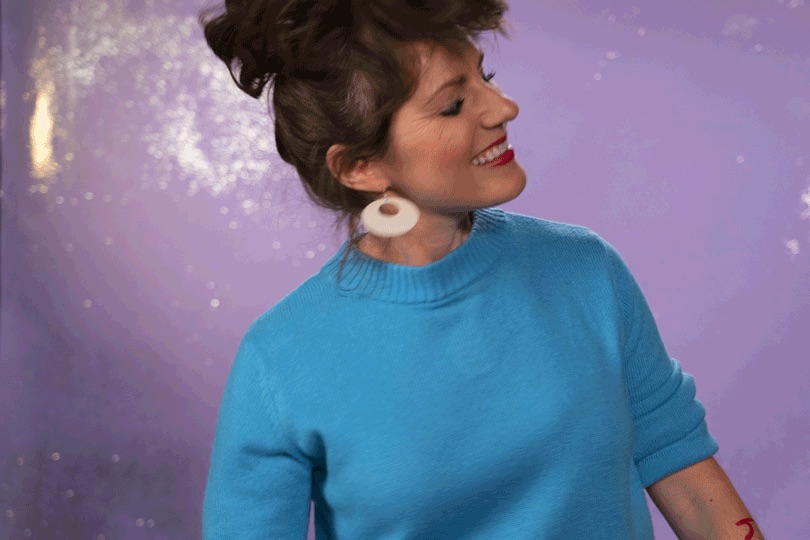 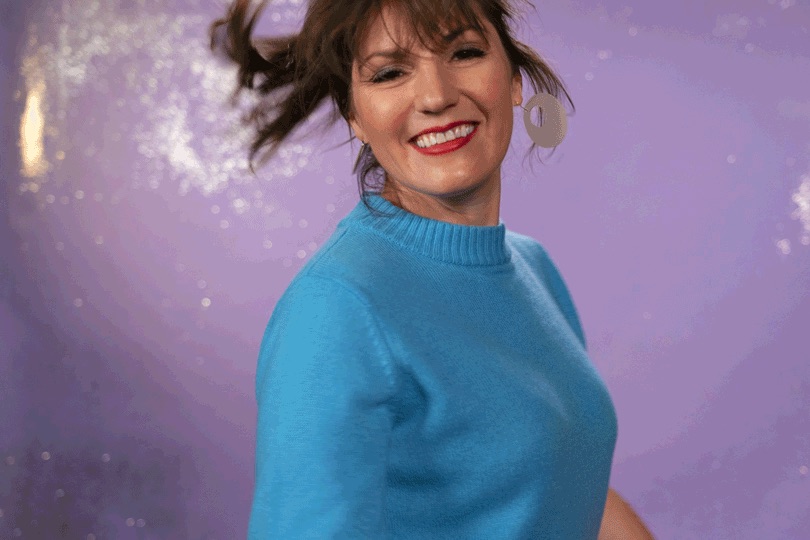 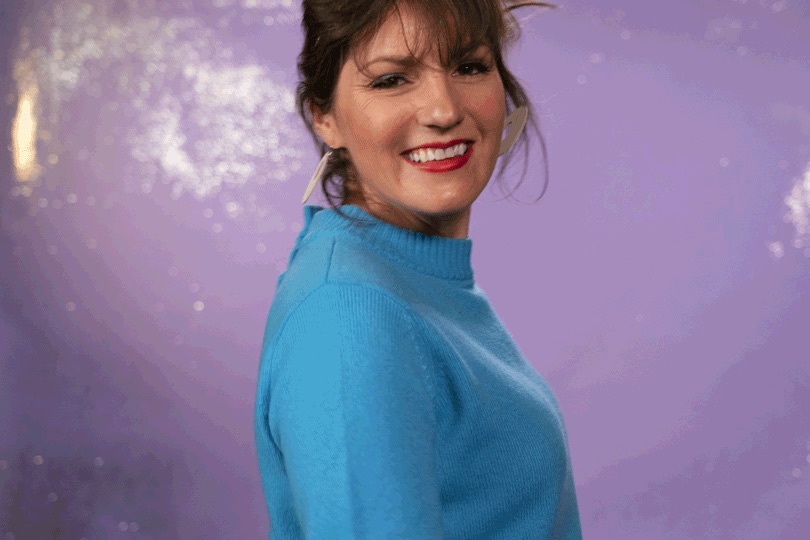 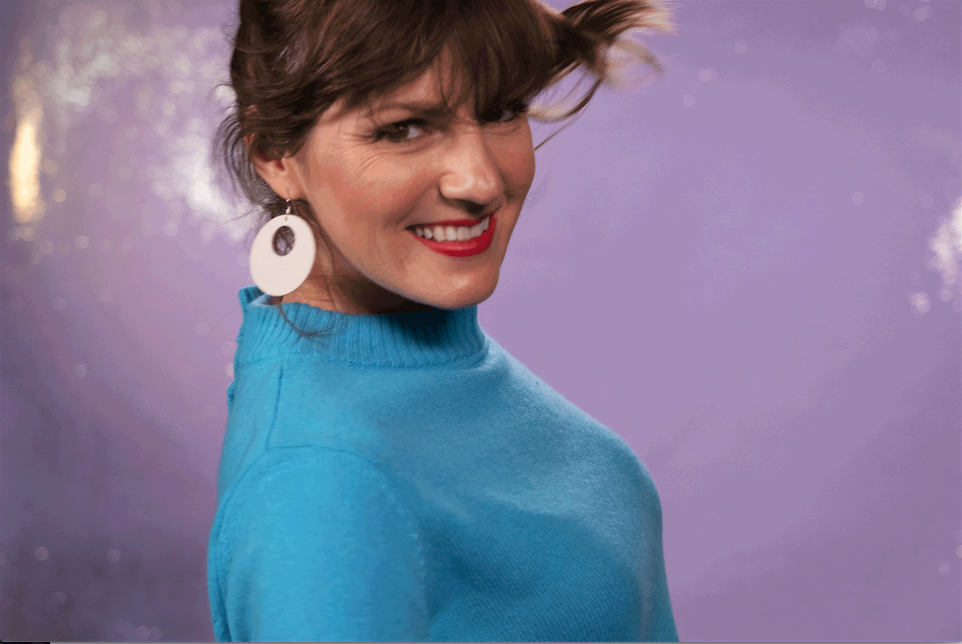 It was truly an expression of pure joy and uninhibited freedom – I was wide awake to myself and my surroundings. Here I was, a quirky Kelly Kapowski wannabe, whipping my hair and living with narcolepsy. Proudly. It was magical.

After we wrapped up and said our goodbyes, I drove home slowly, half-tempted to stop at a bar or restaurant since I was so glammed up. But I’d run out of spoons and sleepiness was overdue. I arrived home safely, heated up a frozen Trader Joe’s frozen lasagna and lay down for a nap. 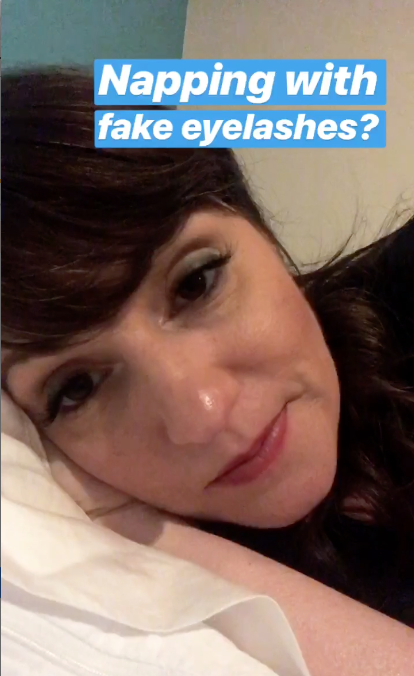 The fake eyelashes were starting to bug me, but I was too tired to figure out how to take them off before my nap. After my nap, I removed the makeup and eyelashes, mixed my nighttime meds and got back in bed to call it a night.

The next morning, I was back to my more professional preppy self, boarding a plane to Dallas to represent Project Sleep at the rather formal ATS Public Advisory Roundtable (PAR) meeting. The two days seemed worlds apart and yet both were entirely grounded in my life’s mission to open people’s eyes to things that might otherwise go unseen. 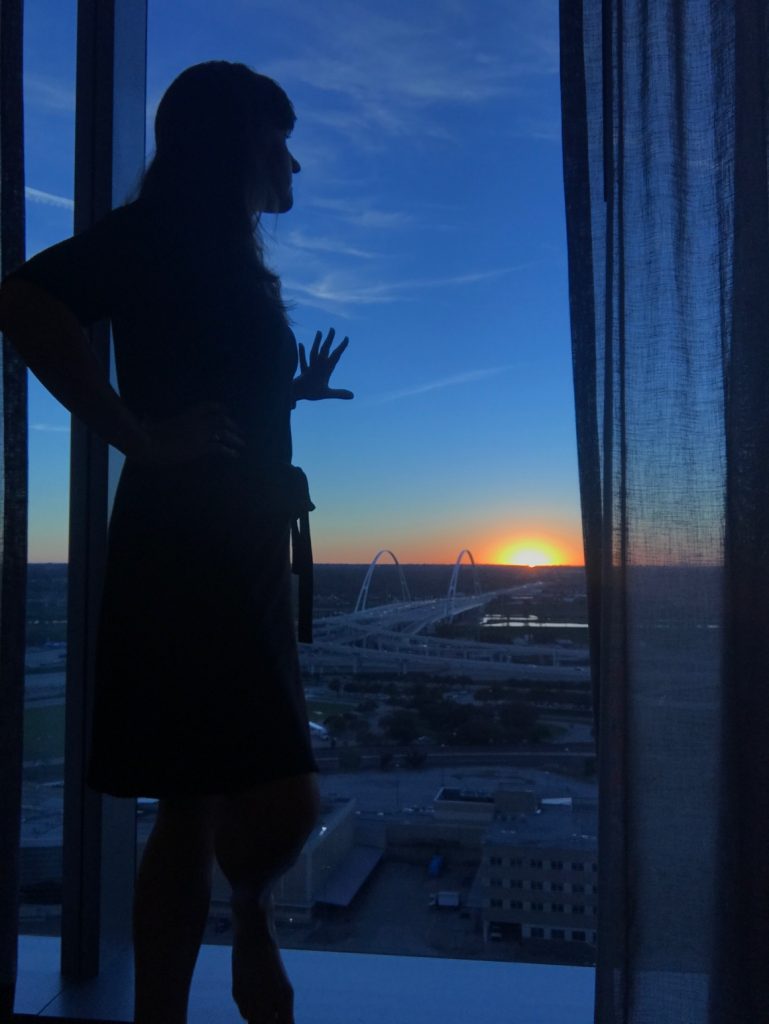 As a person with narcolepsy, being included in this project meant the world to me and I can’t thank Erica, Suffering the Silence, AwesomenessTV, and Visible enough. In less than two days, the video has over 190,000 views!

Thank you also to our amazing hosts, Allyson, Rickey and Aaron and my inspiring co-models Madison, Gianna, Siobhan and Stephanie. Special thanks to Jake Thomas for his amazing photography, the entire film crew, and to Jill and Tina for making me feel so glam! 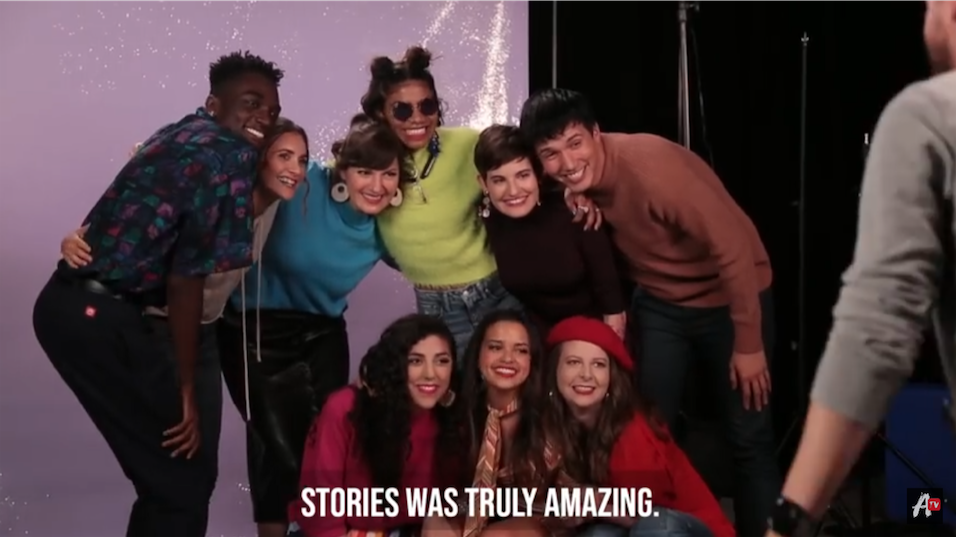 Suffering the Silence is a 501(c)3 organization dedicated to leveraging the power of art, media, and storytelling to raise awareness around the life experiences of people living with chronic illnesses and disability. Learn more: https://www.sufferingthesilence.com/

This video is part of Mobilize, presented by Visible, it is an AwesomenessTV original series that connects with young activists who founded organizations that bring social good to their communities.