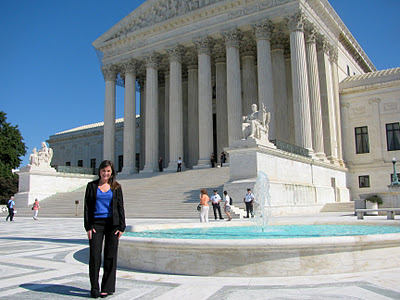 The Court:
Single-file, we entered the courtroom as strangers and sat together on a long wooden bench.  The nine leather chairs at the front of the room were vacant.

This past Wednesday, I had the extraordinary opportunity to visit the Supreme Court of the United States to hear oral arguments in a case involving a woman with narcolepsy – considered by some to be the most important religious and civil rights case in years.

Waiting for the Justices, my eyes wandered.  The sanctity of the space was obvious in every detail. Tuscan marble columns soared as high as redwood trees. Gold-tipped flowers decorated the coffered ceiling.  Red velvet curtains framed the room with theatrical gusto.

Whispers faded as the nine robbed figures entered quietly and assumed their seats on the high bench. The air was thick with tension as the formal proceedings began, but as soon as one of the Justices made an off-hand remark, everyone laughed and relaxed a bit. 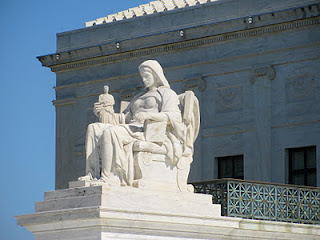 The Case:
Hosanna-Tabor Evangelical Lutheran Church and School v. EEOC (No. 10-553), involves Cheryl Perich, a woman with narcolepsy who worked as a teacher at a Michigan school run by a Lutheran Church.  Ms. Perich claims that she was fired from her job for pursuing an employment discrimination claim.  The church school claims that she was let go for religious reasons and that her threatening to sue was out of line with their internal dispute resolution policy.

The issue before the Court is not whether the church school discriminated or retaliated against Ms. Perich in letting her go.  Instead, the question is whether Ms. Perich has a right to pursue any employment-related claim in a court of law or whether the “ministerial exception” bars her from doing so.  For more background, read my case analysis.

The “ministerial exception” prohibits most employment-related lawsuits against religious organizations by employees performing religious functions.  In this case, the Court examines whether the exception not only applies to religious leaders, but also to religious elementary school teachers.  Ms. Perich taught a full secular curriculum, but also taught daily religious classes and regularly led students in prayer and worship and she was a “called” teacher. 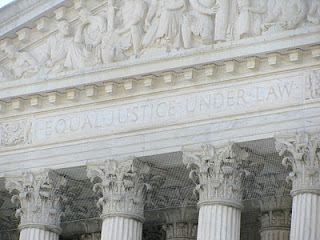 He argued that Ms. Perich was a “minister” under the ministerial exception, however he had a hard time defining the limitations of the exception. For example, should a church’s janitor be considered a minister?

He began making concessions that there were some circumstances when a court could examine the secular duties of a parochial teacher.  Justice Kennedy responded, “That’s what this case is. But you don’t even want that issue to be tried. You say that issue can’t even be explored.”

Eventually, Mr. Laycock outlined a definition of “minister” as anyone who teaches religious or divinity class. “If you teach the religion class,” he stated, “you’re clearly a minister.” Personally, this approach puzzled me, as many religion classes are academic in nature. The study of religion seems different from religious worship.

Next, Leondra Kruger, assistant U.S. Solicitor General, argued on behalf of the Equal Employment Opportunity Commission. Ms. Kruger faired about as well as Mr. Laycock, as the Justices quickly poked holes in her position.

Ms. Kruger argued that anti-discrimination and retaliation laws were so important in these circumstances that limited deference should be given to religious organizations in stopping individuals from coming to the government to report illegal conduct.

“That is extraordinary,” Justice Scalia responded with passion. “We are talking here about the free exercise clause and about the establishemnt caluse, and you say they have no special application?”

“I, too, find that amazing,” Justice Kagan added.

Overall, the Court struggled to balance the competing interests of the church and state. Could there be circumstances when a government interest trumped religious autonomy in employment matters? Justice Sotomayor asked, “How about a teacher who reports sexual abuse to the government and is fired because of that reporting?”

As soon as the Justices began exploring meaningful boundaries for the ministerial exception – some Justices felt they were getting too close to “judging” religious doctrine. It was a catch 22. I have no clue how the U.S. Supreme Court will resolve this issue – as they seemed deeply troubled by all the choices presented to them. 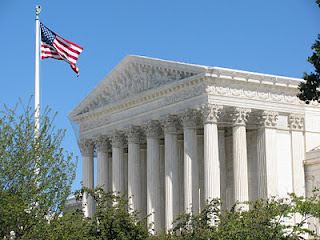 In Conclusion:
Regardless, it was an amazing experience I’ll never forget.  As a law student, I became familiar with these Justices by reading their opinions in small print from heavy books.  It was thrilling to watch their personalities and beliefs come to life in 3D!  They were so human – openly grappling with really tough questions.

Justice Thomas was mute, as usual. He slouched low in his chair with drooping eyelids.  I couldn’t help but wonder if he’s getting enough sleep.

Around the same time, for religious reasons or otherwise – she lost her job. Now, Ms. Perich has spent over six years involved in a legal case that has taken on a life of it’s own.

Ms. Perich’s circumstances have become a vehicle to address difficult societal questions of the seperation of church and state in America.  I hope we can all remember that she did not create these tensions and conflicting interests in our society – rather they have been there since the United States was created.

It is a noble enterprise to respect both religious and civil rights in America. Unfortunately, these interests conflict sometimes, but it doesn’t make the pursuit any less worthy.  I certainly don’t envy the Justices’ role in deciding this case. Perhaps I know why they may not sleep at night.