My boyfriend, Ben plays racquetball recreationally.  I’d never played racquetball before, but as a college squash player and a lifelong tennis player, I thought racquetball would be an easy transition.  Stepping onto the florescent white racquetball court the other night, both Ben and I predicted I may just beat him on my first try.  Yet we didn’t foresee that my greatest opponent that evening would be something else entirely – Cataplexy.

I unwrapped the plastic packaging of my brand-new pink racquet, slipped on my attractive safety-goggles and hopped onto the court. I was excited for a workout and some competitive play. The time was 8:30pm.

Ben followed closely behind, tossing the ball in my direction.  I put out my hand to catch the ball off a bounce, but after the ball hit the floor, it leapt up quickly – like a toy bouncy ball.  I fumbled and missed the catch.  The ball’s jump caught me off-guard, as a squash ball doesn’t bounce nearly as high. And with this unexpected bounce of the ball came a tingling in my head and a slight weakness in my arms and knees.  I knew right then, cataplexy had arrived to play in our game.

Cataplexy is a form of temporary muscle paralysis usually brought on by emotions such as humor, surprise, annoyance or anger. Cataplexy is a unique symptom of narcolepsy – and the symptom that’s given me the most trouble over the last four years.

All too often, when I laugh or I’m surprised or annoyed,  parts of my body give out on me. Sometimes this muscle paralysis is quick and unnoticeable – a slight buckling in my knees or my arms momentarily slackening.  On occasion, the muscle paralysis is total.

For example, a few weeks earlier, while watching television, a particularly funny television commercial brought on a large cataplexy attack.  My entire body fell out of my control and I collapsed sideways onto the nearby bed (luckily I was standing so close to the bed). I lay there unable to move my legs and arms, unable to speak or open my eyes for about 30 seconds. During this time, I was not in pain, but uncomfortable and scared by my shallow breathing. I tried to wait as patiently as possible for my mind and body to reconnect. 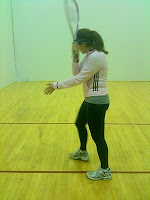 As soon as I sensed cataplexy on the night of the racquetball game, I told Ben.

“We don’t have to play,” he replied, his brow furrowed with concern.

He wasn’t willing to shrug off my cataplexy so quickly. “Are you sure?”

“Yes, we HAVE to play.” We’d been planning this match for months, joking about who might win and placing bets with prizes for the winner.  Finally, the highly-anticipated racquetball game had arrived and I refused to let Cataplexy ruin it.

I threw the ball up in the air, reached my racquet back and swung hard – hitting the ball cross-court to Ben. He hit the ball back towards me. I re-positioned myself to return the ball but once again, I misperceived the ball’s speed, completely whiffing the ball as it skipped out of reach. The ball was too fast and my racquet too short.  Feeling slightly surprised and annoyed, my eye-lids fluttered and the tingling in my head grew stronger – I was dizzy and unsure of myself.

I looked around the room – it was just a large white box with high ceilings and hardwood floors. I thought, I may end up on the floor-boards tonight.  If cataplexy got the worst of me here and I fell to the floor, nothing would brace my fall.  My stomach clenched with nerves.

“It’s worse than I thought,” I admitted to Ben.

“Really? We shouldn’t play then,” he stepped towards me. “We’ll play another time!”

Although nervous, I couldn’t bear to give up so quickly.  Maybe the mature and safe decision would’ve been to walk off the court and come back another day when cataplexy wasn’t affecting me so strongly. I still struggle to know “what’s best” – as I’m not entirely sure of my body and mind’s mysterious moments of narcolepsy and cataplexy.

I closed my eyes, “No, I want to play now. Let’s just hit the ball back and forth softly.”

“Anything else I can do to help?”

“Yeah, just be calm… and no funny jokes please!”

Rallying the ball between us – Ben and I were silent. For the next twenty minutes – I didn’t crack a smile or run after any short or trick shots.  My eyes traced a half-second behind the ball – my vision slightly blurry from the echoes of cataplexy still lingering in my brain.

This was far from the high-energy fun rivalry match we’d planned on, but as I adapted to my surroundings and the bounce of the ball – the foggy fear of cataplexy lifted and with it – my spirit. I began talking more and after about forty-five minutes, we played a mini-match — best out of 3 points.

Ben won 2-1! I’m hoping he’ll give me a re-match when I’m feeling up for it.  Although my cataplexy didn’t necessarily “show” on the outside in this incidence, it still changed my entire perspective and experience on the racquetball court. I am very thankful for Ben’s support and understanding.