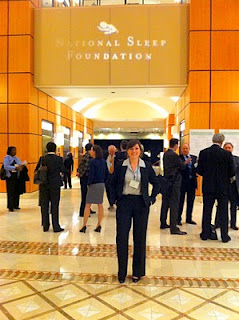 Last week, I attended the National Sleep Foundation‘s Sleep Health & Safety Conference here in Washington, DC.  The conference featured a Public Health & Safety Track and a Health Care Professional Track.  Reviewing the lists of speakers – both sessions sounded fascinating, so I spent one day on each track.  Both mornings, keynote speakers gave exciting informative presentations. And if all this wasn’t enough – there was a fabulous Annual Awards Dinner!

Over the course of the conference, I started to wonder about something I’d never thought much about  before – “Why is sleepiness so elusive?”   It seems that many people have a hard time identifying the feeling of sleepiness in themselves and determining when its “excessive.”

I’m guilty person #1! I didn’t recognize my own excessive sleepiness for many years.  As my narcolepsy developed, I misinterpreted my sleepiness as lack of willpower and concentration. When I kept falling asleep reading cases for law school, I thought I’d lost my passion and determination to succeed.  My family saw my sleepiness are poor manners, as I often fell asleep upon arriving at family gatherings.

It was only when I started having trouble driving 15 minutes in the morning after a full night’s sleep that I realized my sleepiness as sleepiness.  Did it need to get this bad? Looking back, I’m ashamed of how out-of-touch I was to have missed so many earlier signs.  I used to think this lack of awareness was a “personal problem.” I thought maybe I was just terrible at interpreting the subtle rhythms and needs of my body.

However, multiple speakers at the NSF conference raised lack of awareness of sleepiness as an issue facing sleep health and safety in our society.

In a presentation about diagnosing obstructive sleep apnea (a group of sleep disorders affecting at least 5% of our population), one presenter pointed out that many patients with obstructive sleep apnea (OSA) do not present with “excessive daytime sleepiness” – although this is considered a main symptom of OSA.  Instead, people complain of fatigue, tiredness, and lack of energy and concentration. (I’ve also heard of cases in which anger and irritability were manifestations of sleepiness associated with OSA.)  Doctors must be savvy to interpret their patients’ concerns and inquire about sleep habits and sleepiness – as many people with sleep disorders are NOT coming in reporting “I am excessively sleepy and think I have a sleep disorder.”

In a fascinating presentation about the impact of sleep deprivation on distractibility – the speaker discussed various “signs” of sleepiness. She pointed out that the things we usually associate with sleepiness – such as droopy eyelids and head-nods (and I’d add, yawning) are not always good indicators of how sleepy we are. A person may have their eyes wide open and be sitting up with great posture, yet be very far mentally gone (the speaker had some great evidence supporting this).  This is especially concerning in the area of drowsy driving, because if one waits for typical indicators (heavy eyes or head-nods) before thinking “maybe I shouldn’t be driving,” it could be too late.  This presentation made me think – it would be better to recognize earlier more subtle signs of sleepiness.

For me – sleepiness begins as an aching in my neck and shoulders.  It’s a subtle discomfort I used to associate with hunger, but now most of the time I know its impending sleepiness.  The first outward things I do to combat this are to reach my arm around to rub my shoulders and stretch my neck from side-to-side. Next I feel a subtle weight on my head and nausea in my body.

So I pose this question to you – what is your first sign of sleepiness? Can you identify what early warning signs you have that sleepiness is coming?  Perhaps if we could better describe what sleepiness feels like – we may help others identify the early signs of a sleep disorder or drowsy driving.

In closing, a few photos from the NSF Sleep Health & Safety Conference. I highly recommend this for anyone interested – next year’s conference is scheduled for March 2-3, 2012 in Washington DC!

Also, a big thank you to Patricia Higgins, President of Narcolepsy Network for her energy and enthusiasm throughout the conference. It was so great to be able to talk ideas out and promote awareness of narcolepsy together!