NARCOLEPSY: NOT ALONE on the news? It’s true! NBC News Channel 2 KTUU in Alaska recently featured the campaign in a fantastic story about my friend and fellow advocate, Heather.
WATCH HERE.

Interestingly, the NARCOLEPSY: NOT ALONE campaign helped pave the way for this story. About a month ago, Heather worked hard to coordinate an amazing campaign group photo with her Roller Derby team, “The Denali Destroyer Dolls”.

“A news channel photographer was there taking derby photos,” describes Heather, “and while packing up, he saw us taking our group photo for NARCOLEPSY: NOT ALONE campaign. Afterward, he found me and asked about that particular photo and went back to work and reported about it. That is when the news started to contact me.”

Wow, I never imagined that this campaign would lead to so such great things. Big thanks to Heather, our narcolepsy star advocate in Alaska, whose efforts are changing perceptions and raising awareness.

The reporter, Abby reflects, “It was definitely eye-opening for me as well, since I didn’t know too much about narcolepsy until we took on this story.” 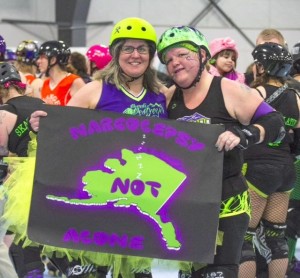 Thank you also to Abby and Rick for taking on this story for KTUU news and debunking the myth of narcolepsy.

“This has truly been a HIGHLIGHT for me,” explains Heather. “Participating in the NARCOLEPSY: NOT ALONE campaign gave me courage and led to this news story. Already, people are reaching out to ask me more about narcolepsy!”

View the REAL SUPERHEROES of narcolepsy