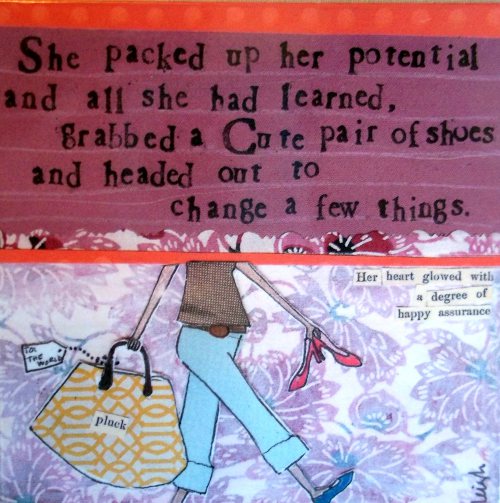 At age 13, I wrote to my aunt (also named Julie) who lived in Arizona – announcing that I would move to Los Angeles immediately to become an actress. I had just seen Romeo + Juliet and fallen in love with Leonardo DiCaprio. Once in Hollywood, I planned to meet Leo, co-star in a movie with him and live happily ever after together. Aunt Julie was my “cool aunt” and I knew she’d understand completely.

Aunt Julie wrote me back, delicately encouraging me to stay in school in New Hampshire for the time being. My 13-year-old heart was crushed. (And I’m sure Leo would’ve been crushed too, if he’d known “the plan”.  😉 )

Since then, I’ve dreamed many other dreams – some whimsical, some life-changing. Of course, I never dreamed of getting narcolepsy nor imagined that this illness would lead me to write a book or meet an amazing boyfriend, Alex.

On our 3rd date, Alex told me he planned to move to Los Angeles in the near future to pursue his filmmaking aspirations. I nodded “okay” quickly, thinking we’d cross that bridge when we got to it. Well, a year later, we are crossing that bridge.

Tomorrow marks the beginning of a new adventure, as Alex and I leave Virginia on route to Los Angeles. I’m so inspired by Alex’s creative talents and courage to pursue his filmmaking dreams. I believe in him. For me, LA is all new. I look forward to the sunshine and meeting Leonardo DiCaprio (just kidding, Alex!).

Although many things will change in the weeks and months ahead, my passion for narcolepsy and sleep awareness will not change. I feel so lucky to have found a unique dream to call my own and a community of friends and supporters all over the world.

During the transition from East Coast to West Coast – I will keep up with the NARCOLEPSY: NOT ALONE campaign but may not be as “in touch” as usual. Once settled, I plan to continue my efforts from my new time zone – full speed ahead!

“May your trails be crooked, winding, lonesome,
dangerous, leading to the most amazing view.
May your mountains rise into and above the clouds.”