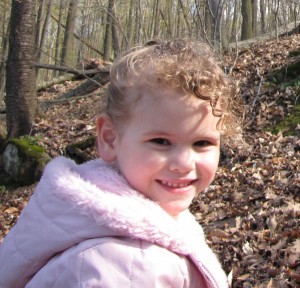 At age five, Makenna was a healthy bright child in Kindergarten, with a great sense of humor and a charming magnetic personality.

Under the Weather:
In February 2011, Makenna came down with pneumonia. She was very sick and admitted to the Children’s Hospital for IV Antibiotics. She recovered from the infection, but never got her strength back.

She started sleeping several hours every afternoon. By mid-April 2011, Makenna‘s mother, Chris took her to their family doctor, but the doctor didn’t see any reason why Makenna was sleeping so much. They decided to try to keep her active throughout the day to break the cycle of daytime napping, thinking maybe she needed her “clock” reset.

Ten days later, Makenna began having weakness when she laughed. Within days, she was completely collapsing to the floor with double vision and slurred speech. 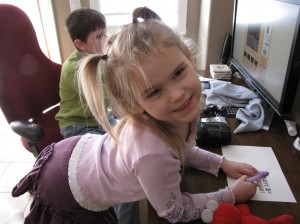 The first week in May, the family doctor recognized that “something” was wrong but didn’t know what it could be.  Makenna was admitted to the Children’s Hospital for a CT scan and consultation with a neurologist, who took very detailed history of her symptoms and family history. That same day, the neurologist had a working diagnosis of “narcolepsy with cataplexy.”

To rule out a brain tumor, she had an MRI and to rule out epilepsy, she had an EEG. That same week, an overnight sleep study followed by a multiple sleep latency test confirmed her diagnosis of narcolepsy with cataplexy. From the onset of symptoms to diagnosis only took 8 weeks. 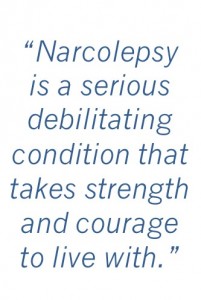 The past year and a half, young Makenna has been so brave. “Emotionally, she is a rock,” describes Chris. “She is stronger than her Daddy and I when it comes to what she faces. She often tells me, ‘It’s okay, Mommy, I’ll be fine.'”

In the beginning, Makenna was having 50 to 100 cataplexy attacks a day. She’s tried a few different medications. Currently, she’s only taking a stimulant, which has reduced her nap time down to 1 hour a day (from 4 hours a day). As long as she takes her stimulant and isn’t tired, her cataplexy is manageable. Currently, she falls down from cataplexy 5 to 10 times a day. They will explore more medication options when she’s older, but because she’s only seven, “we are being cautious and medicating as little as possible.”

Community Support:
Her school has been very supportive, assigning a full time Educational Assistant right away who never leaves her side. Because Makenna takes naps, the school provided a quiet room where she can sleep as long as she needs, without question. Her mother, Chris receives a detailed report at the end of each day and the EA, teacher, principal work with Chris to optimize Makenna‘s school experience. 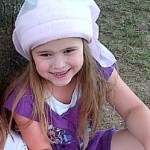 At age seven, Makenna is fully aware of the her condition and can explain it to anyone who asks her “what is narcolepsy?”

“She’s so bright and I often think it is because of the increased sleeping she does,” Chris says. “And when she can’t sleep at night, she either reads or does work in her math books. When she has extra energy, she finds some chore around the house to do… because she’s just that helpful!”

During the walk, she and her friends held up a sign saying “Don’t mess with my sleep!” Makenna managed to do 3km, even thought it was her nap-time. The final 2Km she did while sleeping in the stroller. 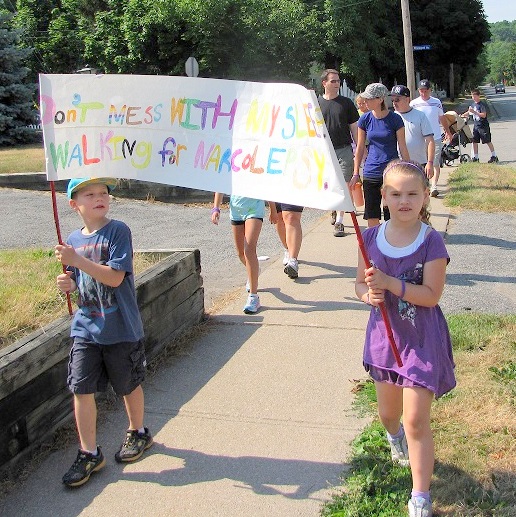 “Everyone who has heard about Makenna‘s condition has lots of questions,” Chris explains. A few people have subsequently gone to their doctors to request sleep studies after hearing about Makenna‘s symptoms and diagnosis.

Back in 1955, Chris’ uncle was diagnosed with narcolepsy with cataplexy at age 19. “Back then, narcolepsy was believed to be a psychiatric condition and he was made to feel like he was ‘crazy.’ He lost jobs and friends over the years, primarily due to the lack of awareness about narcolepsy. I want to raise awareness so that when Makenna is grown up, she has opportunities without discrimination. I don’t want anyone to think she’s lazy, attention-seeking, unmotivated, anti-social, or just plain crazy because she has cataplexy or needs to sleep during the day.” 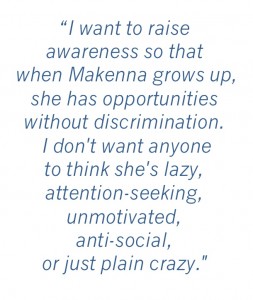 Chris would also like doctors to be more familiar with narcolepsy and for more treatment options to be approved for children, which is why supporting research is so important.

Their “Walk for Narcolepsy Research” raised a remarkable $1,390 and every dollar was sent to Stanford University’s Center for Narcolepsy.

In closing…
“Narcolepsy is a serious debilitating condition that takes strength and courage to live with,” explains Chris. “And is definitely not a ‘funny’ matter as most people are lead to believe.”

REM Runner’s thoughts: I’m humbled and saddened that Makenna has faced so much adversity in her young life. Yet, her bright positive attitude and fighting spirit far exceed her years!  Ms. Makenna: you are a brave young woman and an inspiring role model to me! I am honored to share your story on my narcolepsy blog.