About a year ago, my good friend posted a picture of her lobster dinner on Facebook. Usually I “like” all of her Facebook pictures, but I specifically did NOT press “like” this time. Why? Because her lobster looked delicious and I wanted it.

Well, more than her lobster, I wanted her circumstances. My father had recently passed away, I had little money in the bank and felt alone in the world. My friend was out to dinner with her family.  I should’ve been happy for her, but I wasn’t. I was jealous.

“To cure jealousy is to see it for what it is, a dissatisfaction with self.”

Within ten seconds, I moved on and didn’t think of the lobster again, until a few months later, when I learned one of the greatest lessons of my life. I was in a yoga class taught by Taylor Wells, a successful entrepreneur, life-style columnist and blogger.

During yoga class, Taylor described that “There is enough success and positive energy for everyone. No one else’s success depends on someone else’s failing. Sometimes, we hoard our energy – afraid that if we give it away, we won’t have any left. But actually, when we share our energy, it comes back to us five-fold.” 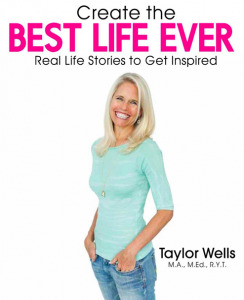 In her recently published book, Create the Best Life Ever: Real Life Stories to Get Inspired, Taylor eloquently describes:

“The reality of this Universe is abundance, not scarcity. Scarcity is not real. It’s a fear-based mentality that has been perpetuated for centuries on this planet. All those who’ve been incredible creators didn’t buy into the (erroneous) scarcity mentality… They knew that there is more than enough for everyone, and that them winning didn’t mean that anyone else lost.”

So how do we shift our jealous feelings?

“The next time you feel that awful feeling (jealousy always feels bad), let it go and reassure yourself that you can be, do, and have anything you want. And so can she. And so can he.”

Taylor’s wisdom helped me find peace with some people in my life who seemed unable to express happiness for my acheivements.

And while I’m generally a supportive friend to others, the Facebook lobster incident came back to mind and I laughed at myself. Now, I know that my friend can have her lobster and eat it too.  There are plenty more lobsters in the sea.

Taylor Wells is an inspiration and I highly recommend her book, blog and yoga studios (in NYC and Boston area). I’ve only imparted a small portion of Taylor’s wisdom here. I can’t fully express how much she has helped me find a more positive peaceful path.