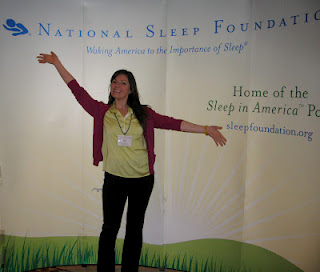 NSART:
On Thursday, I represented WUN at the National Sleep Awareness Roundtable (NSART). This was my second year attending this meeting.  NSART is a national coalition of government, professional, voluntary, and other organizations whose mission is:

– To raise awareness about;
– To increase the understanding of; and
– To reduce the public health and safety impact of sleep deprivation and sleep disorders by improving communications and collaboration among local, state, and federal agencies; professional organizations; and the public.

It was truly an honor to be included in the discussion.  We brainstormed various ways to promote sleep awareness. Members were excited to hear about SLEEP WALK 2012 and expressed interest in joining us!NSF Conference:

On Friday and Saturday, I attended the National Sleep Foundation’s Conference, which has two tracks – a Public Health & Safety Track and a Health Care Professional Track.  Both tracks had fascinating sessions, so I switched between the two. There were keynote speakers and a fabulous Annual Awards Dinner!

The dinner also featured a wonderful presentation about the sleep and dreams of various animals. Did you know that dolphins sleep with only half their brain at a time while the other half remains conscious enough to breathe and to look out for predators and obstacles?  After about two hours, the dolphin switches sleep sides so the other side of the brain can sleep.  I wonder what it feels like to have half of your brain sleeping… Fascinating!