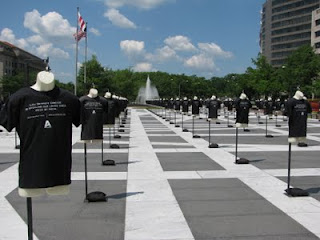 With one of my best friends, Melissa, visiting from San Francisco yesterday, we were on our way to lunch near the White House when something strange caught our attention. Across the street, black signs or objects stood spread out through an otherwise open plaza area.  Perhaps it was an art instillation? Being art lovers, we had to take a closer look.

Crossing the street, the objects quickly took the form of human bodies – a sea of mannequins dressed in black t-shirts. Maybe a protest to war?

It wasn’t until standing face-to-face with a mannequin in the front row that I could make out the t-shirt’s message. It read: “Lou Gehrig’s Disease is stealing our loved ones piece by piece.”

My friend, Melissa disappeared into a row of bodies, while I stood frozen in front of this first one. My heart dropped to the pit of my stomach. This wasn’t art. This wasn’t war. It was ALS.

ALS (Amyotrophic Lateral Sclerosis), also known as Lou Gehrig’s Disease is a deadly disease affecting the motor neurons in a person’s brain and spinal cord. Upon diagnosis, doctors give ALS patients only two to five years to live. The disease can strike anyone, regardless of age, gender or ethnicity.  Researchers have found that military veterans are two times more likely to be diagnosed with ALS, although the cause for the connection remains a mystery.  There is no cure for ALS.

Looking at the mass of mannequins before me, my mind raced ahead. I was familiar with ALS, as a member of my family passed away with this disease the year before I was born.

Finally stepping past the first mannequin, I saw the back of a shirt – inscribed with was a man’s name along with birth and death dates. My throat tightened and my eyes glazed over with undeniable sadness.

I continued walking through waves of bodies, each standing in honor of a person who’d passed away of ALS.  I swallowed back tears and found myself intuitively checking the back of t-shirts for my family member’s name. Perchance he was represented here.

Yet, after checking the backs of about ten shirts, I looked around at the seemingly endless rows of mannequins with overwhelming anxiety.  Like a child lost in a crowded mall, I felt helpless and expendable.  There were far too many bodies to search one-by-one.

I spotted Melissa talking to a volunteer in the distance and decided to join them. As I approached, Melissa removed her sunglasses and whipped under her eyes. She had been crying.

This exhibition had a strong impact on both of us, and for this, I am very thankful.  Melissa hadn’t been familiar with the specifics of ALS. “They were all so young,” she said. I nodded. The volunteer nodded too, pointing out the close by mannequin in honor of her mother.

This “Piece By Piece Tribute” Exhibition (a project of the ALS Association Florida Chapter) toured all over the state of Florida and now in multiple locations in Washington DC. Looking back on it – this was art and this was war – battles individuals and families fight everyday here in America. 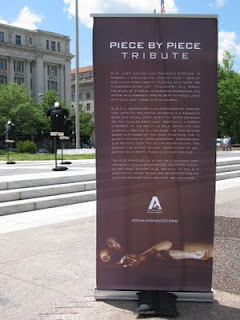 Yesterday’s display was in conjunction with the ALS Association’s Congressional Advocacy Day, taking place today, Tuesday May 10th. They will be advocating for a greater commitment to ALS research.

To those participating in this effort – we wish you the best of luck! Your message is powerful and deserves to be heard.