In the after-glow of the marathon, I made my way from the finish line over to Sonsie Restaurant on Newbury Street, where Wake Up Narcolepsy was hosting a post-race celebration for its four marathon runners and their supporters.

Although physically drained, I was still “flying high” with awe and excitement that I’d actually done it!  It was wonderful to meet up with the other three W.U.N. runners and hear about their race-day experiences, as we all ran at different paces. All four of W.U.N.’s runners successfully finished the marathon in under five hours, (I was the slowest of the group).  Also, it was great to celebrate with my super-fans! 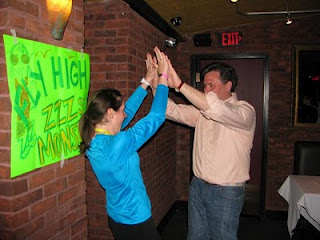 High Five with my superfan, Steve 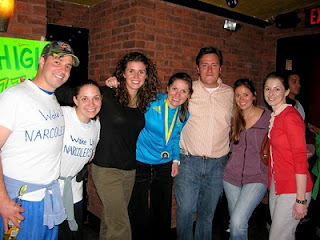 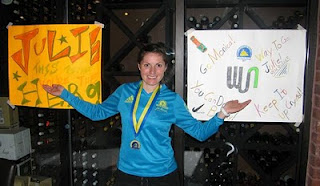 At the Wake Up Narcolepsy Marathon Celebration

Wake Up Narcolepsy’s founder, Kevin Cosgrove, gave a nice speech thanking the four marathon runners for their contributions to his organization.  I’m proud to announce that I raised over $6,000 through my marathon efforts.  And together, W.U.N.’s four marathoners raised $30,000 towards finding a cure for narcolepsy! 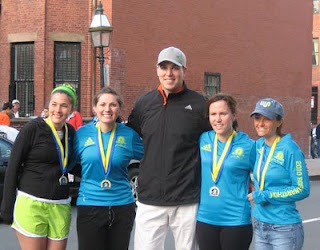 Thank you for all your support, good wishes, and messages of congratulations. Its been an honor and a joy to share my journey as a person with narcolepsy getting back into shape to run the Boston Marathon here on this blog.