If you happen to be in the Dupont Circle area this afternoon, you might have seen the REM Runner out and about. But I wasn’t running. No, I was walking. In the rain. Carrying a 4 foot white styrofoam log-shaped roller tucked under my arm. 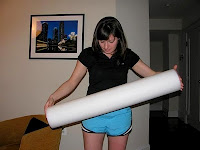 This gigantic styrofoam log is part of my brand new treatment plan that I’ll be following in the months to come to combat the tendonitis in my knees. Although I thought I had my tendonitis under manageable control, I began experiencing pain under my knees in last couple miles of my 18 mile run. After that, I tried to continue running cautiously, but it actually continued to get worse in my left knee to the point that I haven’t been able to run in almost a week now.

This has been extremely frustrating. I’m supposed to be overcoming narcolepsy to run this marathon, yet my knees are giving me the most serious trouble right now. I’m tempted to change the title of my blog to: “REMRunner: training for the Boston Marathon with narcolepsy and tendonitis.”

Today, strolling the streets of DC carrying this gigantic Styrofoam tube under arm, I couldn’t help but wonder – how did it come to this?

Running used to be this simple thing for me. I just went out, got sweaty and returned home – end of story. There was no stretching, no strengthening, no icing, no GU packets, no protein-carb balanced diet. Now, running involves so many more factors. In a way, I feel like I’m in a relationship with running and things just got “complicated.”

Maybe you’ve been in a relationship like this: for the first five months, everything went extremely well. I was foot-loose and fancy free – building up mileage towards my marathon goal with ease. Sure, my body had a few minor complaints, but nothing too problematic; no red-flags. For the most part – we got along great.

During these early months, I was on cloud nine with running. Dare I say, I fell head-over-heels in love with it. Because of running, I felt stronger and healthier than ever – thus the benefits of this relationship heavily outweighed any difficulties or sacrifices. Even the winter weather didn’t feel quite so miserable, so long as I had running.

Yet five months in, I attempted to take this relationship to a more serious level (of running 18 miles) and everything fell to pieces. Maybe it was all too good to be true. Perhaps I was living in a dream world to think that my knee issues had simply disappeared into thin air. Regardless – things are now much more complicated and it’s time that I face the music.

Thus, with less than seven weeks until the marathon, I’m entering a new phase of my training. I visited a physical therapist today and together, we created a new schedule of exercises and stretches to hopefully restore the proper functioning of my knees so that my tendonitis doesn’t further impinge my training.

Turns out, there are two major factors contributing to my knee problems. First, my IT bands are too tight. I’ve always known this but didn’t know what else I could do to combat this besides a few stretches. This is where the foam roller comes in. In addition to my usual stretches, I will be rolling my IT bands across this styrofoam log every day to loosen them up.

My second problem, as identified by my astute physical therapist today, is that my hips are extremely weak which is putting extra strain on my knees as I run. I have a new hip-strengthening exercise to improve this problem. The first time I tried this exercise, my legs began shaking uncontrollably after a few repetitions. Strange that my legs could be so strong in some areas yet so extremely weak in other places. But, as the great Shakira once said, “These hips don’t lie… So be wise and keep on, reading the signs of my body.”

Returning to my apartment building today after physical therapy, new Styrofoam log in tow, I was happy to see a friendly face at the front desk. My Kenyan doorman, Freddy, inquired about the object under my arms. I explained that this torture-instrument was to loosen my legs for my running. I admitted that my knees weren’t doing well and everything was a mess right now.

Freddy looked at me with steady eyes and said, “I can tell that you will complete this marathon.”

For some reason, when he says something like this, I believe him. I don’t know why, but I get the feeling that Freddy doesn’t just spout out compliments and predictions for the hell of it.

I thanked him for his belief in me. He reiterated his point, “Yes, you will complete this marathon… You may not come in first, but… second. You’ll come in second. I’ve already predicted who will come in first!”
And with this, we both broke out into thunderous deep-belly laughter. We’d come full circle and once again, he was implying that a Kenyan was going to beat me. I would have resisted, but today, his prediction that I would complete the marathon was more than enough for me. Today, I was satisfied to come in second to a Kenyan. 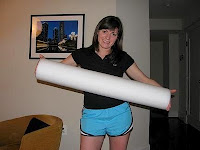