REM Runner’s Note: This is a very special guest post today. Peter is a dear friend and an amazing leader in the circadian sleep disorder community. He will be speaking at the upcoming NN Conference 2013 and I highly recommend attending his session. Peter is a great speaker – he is kind and humble yet commanding and professional. I always listen closely when Peter speaks. His message and mission are so important. Thanks for sharing your story with my readers, Peter! 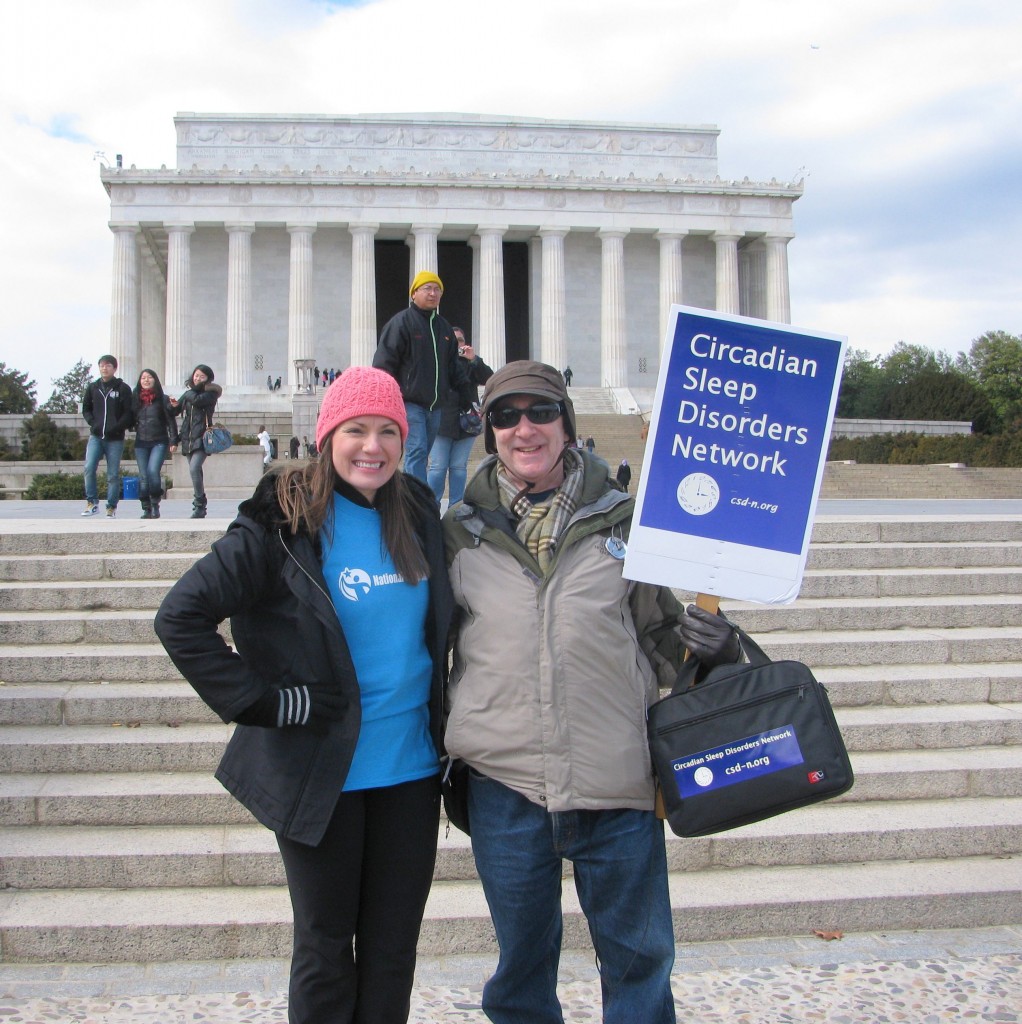 As a child I always woke up early, often before 6am. But by high school I wanted to sleep late. I was often scolded at night for not going to bed at bedtime, but that’s when I was doing my best homework. In college I was having real trouble getting up for class. My roommate junior year threatened to go to the authorities because I kept snoozing my alarm, seven, eight, nine times, so he was being repeatedly waked up over the better part of an hour. I was unaware that I was even doing that. 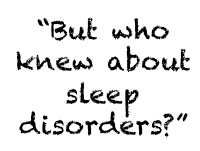 But who knew about sleep disorders? A lot of people complained about hating to get up in the morning. So I just forced myself to do so. And managed to do very well academically.

Just my luck, junior year I had to take the earliest class of my college career. I had an hour between classes, and I was so tired that I would lie down in the corridor outside the next classroom and nap. If you’re tired enough, it doesn’t matter how weird you look. I also started having migraines after that class, but didn’t really make the connection with the early rise time. In grad school I was rarely able to make the required early morning seminars. Fortunately, my graded classes were later in the day.

In my first year-round job I was able to negotiate a later start time, 10:00 am. Not sure how I found the nerve even to ask for that, but I did. But subsequent jobs had rigid early start times, at 8:30 am. I was always tired, but I managed. Who knew about sleep disorders? It never occurred to me that I had a disorder.

After a number of years of struggling I got sick, and missed several weeks of work. By the time I went back, I just couldn’t get up so early anymore. I burned through all the accumulated leave I had, an hour or two every day. My manager was increasingly impatient with me.

I finally saw a neurologist. He referred me to a sleep clinic for an overnight sleep study. But sleep clinics were new, and rare. I had to travel to New York City, to Montefiore Hospital, to be tested. What a stroke of luck! Unbeknownst to me, this was where a team of researchers was elucidating the first descriptions of DSPS (Delayed Sleep Phase Syndrome). They hadn’t even published their seminal paper [1] yet, but they immediately recognized the syndrome.

They were also exploring chronotherapy, resetting the body clock by moving one’s sleep time later every few days, around the clock, until arriving at the desired sleep schedule. Then it would be necessary to stick to that schedule religiously. Something in me said this wouldn’t be stable, that I would not be able to stick to that schedule and never get to bed late even in an emergency. In any case, I no longer had enough saved vacation time to do it. Another stroke of luck: we now believe that this type of chronotherapy can sometimes lead to Non-24-Hour Sleep-Wake Disorder, which is far more difficult to live with.

Armed with the knowledge that I had DSPS, and the letter from the doctor, I went back to my manager. I was able to negotiate a much later start time, by accepting part time work. Initially I started work at 1:00 pm. After several years my boss’s boss left, and his replacement would not accept the schedule I had negotiated. I lost my physics job, and my career in research, but found another as a contractor in computer programming. Over a number of years and several different contracts the 1:00 pm start time became 2:00 pm, and often I was late even for that. But I did good work, and my managers put up with my lateness. 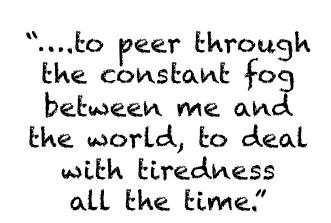 I had been slightly depressed most of my adult life, without even realizing it. Twice I’d had serious depressive episodes, lasting about 5 months each. But no more. I’ve felt more positive generally, and have not had serious depressions, since living on my body’s natural schedule. I attribute the former depression to the struggle, day in and day out, to get up in time for work, to peer through the constant fog between me and the world, to deal with tiredness all the time. 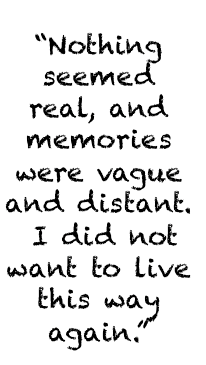 I tried shifting my schedule earlier by using a lightbox in the morning. Not as soon as I got up, because that triggered migraines, but about an hour later. While I was able to get to bed somewhat earlier, and to get up earlier by using an alarm, I felt like I was floating in a dream world all day. Nothing seemed real, and memories were vague and distant. I did not want to live this way again.

I do still use the lightbox, but only on what is now my natural schedule. About an hour after I get up, I read the newspaper in front of a lightbox, exposing my eyes to 10,000 lux for half an hour to an hour. It seems to keep my sleep times more regular, from day to day, and my sleep more consolidated.

I also tried melatonin at bedtime. Large doses (one doctor had me take 6 mg) triggered migraines. I did use 0.1 mg every night for a long time, but wondered if it contributed to my occasional migraines. When I went off it, I didn’t notice any difference in my sleep. So I no longer take it. 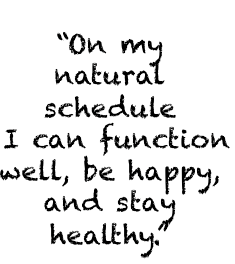 I worked for the last several years as a software engineer, with hours from 2:00 to 8:00 pm, although I often arrived late and stayed late. I was never hired as an employee, always as a contractor, since HR departments seemed to frown on my non-standard schedule. But I was able to be a productive member of society, and I got paid reasonably well.

These days I normally go to bed around 3:00 am, and sleep till noon. I still feel tired for the first hour or two after I wake up, and holding a conversation then is difficult. But that improves as the day goes on. I often feel a spell of tiredness later, and I take a short nap (20-30 minutes) during the afternoon. I’m rarely 100% alert – there’s usually still a slight tiredness – but it’s not a problem, and isn’t anything close to how dragged out and foggy and dysfunctional I feel if I go against my body’s preferred sleep schedule.

On my natural schedule I can function well, be happy, and stay healthy.

Most people have not heard of DSPS or Non-24. Our friends and families did not believe these were real disorders. They said we were just lazy or undisciplined. General practitioners were not aware of them. If we mentioned finding them on the internet, they dismissed us, and just fed us sleeping pills. Even sleep specialists did not recognize the disorders, or they considered DSPS to be a disorder of teens, and non-24 a disorder of blind people. Patients could not get accommodations at work or school.

Our mission: Circadian Sleep Disorders Network is a nonprofit organization dedicated to improving the lives of people with chronic circadian rhythm disorders.

We aim to increase awareness within the medical community and among the general public, to provide emotional support and practical ideas for people living with these disorders, to encourage research into circadian rhythms, and to advocate for accommodations in education and employment for people with circadian rhythm sleep disorders. 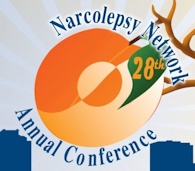 Hear Peter speak at the Narcolepsy Network Conference 2013!
Session Title: Circadian Rhythm Sleep Disorders and Narcolepsy
Description: Many PWNs go to bed late and have real trouble getting up on time in the morning. Delayed sleep seems to be common with them. In this session we explore Delayed Sleep Phase Disorder and Non-24-Hour Sleep-Wake Disorder. We discuss diagnosis and the potential for DSPD to be misdiagnosed as narcolepsy. We’ll note that those of us with circadian disorders face many of the same prejudices that confront PWNs.