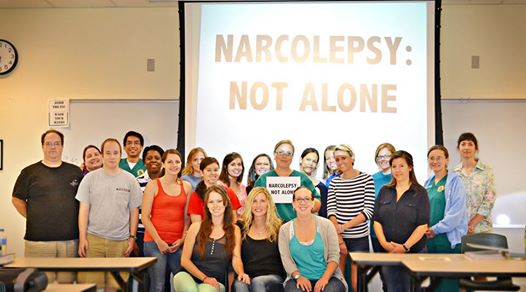 When I learned about Julie’s NARCOLEPSY: NOT ALONE campaign, I realized that I had the perfect platform to help raise awareness. As a nursing student, I thought I could do a presentation about narcolepsy to my nursing class, and to ask for volunteers to take a campaign photo. My hope was that my classmates would carry the information with them throughout their careers, and that maybe someone, somewhere would receive an earlier narcolepsy diagnosis. My classmates and I are very close, and they were a steady source of support while I was looking for my diagnosis. I was diagnosed this past May after the semester had ended, so this would also be a great opportunity to explain to everyone about narcolepsy. This idea sounded great in my mind and I became very excited about it, but then I realized how scared I actually was. 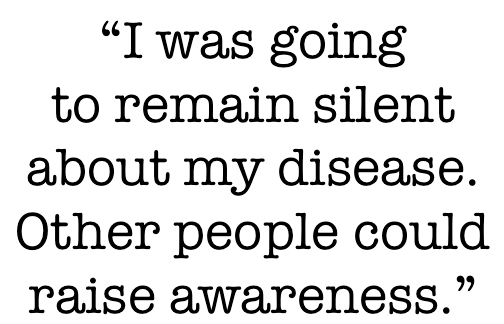 First, I would need to ask my instructor for permission to allot class time for my presentation. Up until this point I had only shared my diagnosis with people I was close with. I became fearful that by sharing my diagnosis with my instructor, she would inform me that my condition posed a risk to my performance at the hospital. What if during my final semester of nursing school, after four years of hard work, she told me that I was out of the program? I felt this was something that I could not risk, and that it would be selfish and unfair to my husband and our three children to put my new career on the line. Besides, even if I were to do the presentation, everyone would probably half listen as they noisily packed up their books while impatiently waiting for me to finish, and I’d be lucky if just a few people volunteered for the photo. That night I firmly decided that I wasn’t going to do it. I was going to remain silent about my disease. Other people could raise awareness. 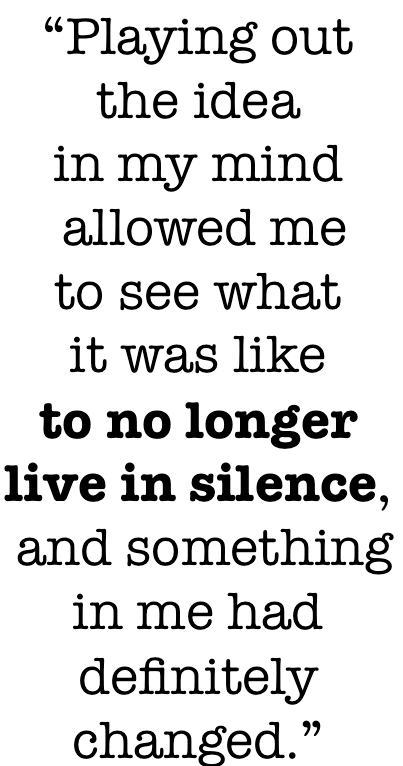 But in the morning I printed out a Narcolepsy: Not Alone sign before leaving for class. Playing out the idea in my mind allowed me to see what it was like to no longer live in silence, and something in me had definitely changed. I felt so strongly about the meaning behind this photograph: not only would it represent empowerment that people living with narcolepsy can be successful in school and other goals, but it would also exemplify awareness through education. I had the privilege to equip a group of graduating RNs with knowledge about this disease that would continue to circulate to patients and other medical professionals throughout the span of their careers. My position had changed from, ‘Let someone else do it’, to, ‘How can I not take advantage of my position to educate?’

I visited my instructor during her office hours and explained everything – showing her the sign. To my astonishment (and extreme relief), she was completely understanding and supportive! She was very familiar with narcolepsy, so the possible misconceptions that I feared she might have were nonexistent. She thought the presentation was a great idea, and she was even my first volunteer to be in the photo! I contacted Julie to tell her about my idea, and she was very supportive. Not only did she provide resource material for me to use in my presentation, but she also cheered me on and offered guidance along the way! Knowing that she was behind me gave me an extra boost of confidence.

Even though I had rehearsed my presentation several times, I felt extremely nervous when I stood in front of my class two days later. What if I forgot something? What if they thought my presentation was useless? Why did I think that I qualified to raise awareness about narcolepsy? My mouth became so dry that I could barely talk, and I was trying to rush through the slides before my audience became impatient. But at some point I realized that the room was completely silent. No one was moving, or packing up books, or on the edge of their seat ready to walk out the door. Every single person was facing front and giving me their full attention, and nodding their heads in understanding. While I spoke, I received compassionate smiles and eye contact that told me, “Yes, I remember when you were struggling through that.”

The final slides in my Power Point introduced Julie Flygare, her book, and her campaign. I asked for volunteers, and explained that since the picture would be used in the campaign, I would not take it personally if anyone felt uncomfortable being photographed. However, my classmates did not hesitate! After we took the picture, I received lots of hugs and compliments on my presentation. Several people thanked me for educating them about such an underdiagnosed disease. I also spoke with a few classmates who had questions afterward. In the end, I definitely feel that I made the right decision, and I’m glad that I went forward with my idea.

Prior to having narcolepsy, I was an extremely high-functioning individual. In hindsight I can see the symptoms of narcolepsy creeping up in my twenties, however, in May 2012 at age 32 is when it started to hit hard. I knew something was wrong, but friends and doctors told me otherwise. I continued to decline that year, and by November I was barely functioning day to day. I loved my life, but no matter how hard I tried to hold onto it, it felt like sand falling through my fingers. I no longer had the ability to be me anymore. I fought hard to find a diagnosis, and I ran the gambit of diagnostic testing and consultations with numerous specialists. I quite literally had a part time job keeping up with all of my appointments. Finally, on May 20, 2013, I received my diagnosis of narcolepsy without cataplexy. 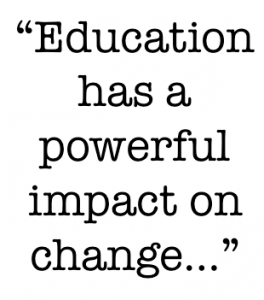 It breaks my heart to know that I am one of the “lucky ones” to be diagnosed in one year. I sincerely believe that education has a powerful impact on change, and the current delay between symptom onset and diagnosis is unacceptable. We have the capacity to change this, and Julie has made great strides toward that goal. I could never adequately express my gratitude to Julie for advocating for all of us. Without her inspiration and the avenue she’s provided to help raise awareness through her campaign, I never would have thought to do this, and I would still be living in silence. Thank you, Julie, for supporting me in raising awareness in my corner of the world. This was a life changing experience for me!

REM Runner’s Note: Thank you, Jennifer for sharing your inspiring story. You are an amazing role model to many young people with narcolepsy and by raising awareness in your nursing school, you’ve helped to create a brighter future for all those with narcolepsy. It’s an honor to be your friend and fellow advocate!