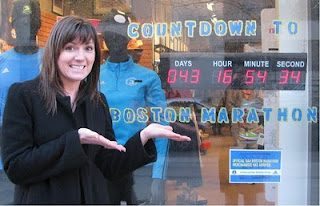 With 43 days until the marathon, I traveled to Boston this past weekend for the Wake Up Narcolepsy marathon fundraiser, hosted in support of the four women (myself included) who will be running 26.2 miles on April 19th, 2010 towards finding a cure for narcolepsy.
I was excited to be back in my old stomping grounds of Boston – if only for a quick trip. The day of the fundraiser, Saturday March 6th, was absolutely picture-perfect beautiful. Although multiple Bostonians reassured me that this was the first “nice day” since last fall, it was impossible not to fall back in love with Boston on such a day.
Before attending the fundraiser in the evening, I spent the late afternoon hours wondering around Back Bay and the South End with my sister. Almost everything was exactly as I remembered it from back in September 2009, when I left Boston for DC. Yet, there was something slightly different about Boston now – or rather – something different about me.
Walking down Boylston Street, I noticed a thick yellow line painted across the pavement. I looked up to survey exactly where this line was in relation to everything else. The line crossed Boylston right in front of the Boston Public Library, just outside Copley Square. Given this location, it quickly occurred to me that this was the finish line of the Boston Marathon! I’d walked by this very spot hundreds of times and perhaps I’d seen the line before, but I certainly never gave it much thought. On this day, it meant much more. 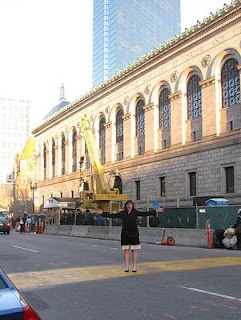 For some reason, I wanted to stand on the line to see what it felt like. Although Boylston was bustling with traffic, I waited patiently for a break in the flow and ran out into the middle of the street. I turned back around, opened my arms and smiled for a picture, taken for me by my sister (great work, sis!). After only a few seconds, the stream of SUVs and Cabbies resurfaced, and I scurried back to the side of the street – while being honked at by one particularly impatient taxi.

Looking back at the picture now, I can’t help but wonder, “Why was I acting like such a silly tourist in the city I call home?” Maybe the warm weather got to my head or perhaps it was the past seven months I’d spent away in DC. There’s no good explanation really…
However, I will say that while standing on that line, arms open towards a golden sunset in the distance – I could have cared less what anyone thought of me. I am so proud to be running the marathon for Wake Up Narcolepsy and look forward to – hopefully – fingers crossed – stretching my arms out again in this same spot on another afternoon in the near future. Only next time I stand there, I hope to be greeted with much more noise and ruckus than just one flimsy taxi horn! 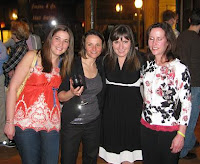 Later on, I made my way to the Vault in the financial district for the fundraiser. This Wake Up Narcolepsy event featured a DJ, appetizers and an exceptional raffle. We had an incredible turnout and I’d like to thank all those who came out to support me and the three other WUN marathon contenders – Monica, Crystal and Becky.
I’m proud to report that with our attendees’ generous support, we raised $2,500 towards our marathon efforts! Also, I’d like to thank Kevin for planning and hosting this wonderful fundraiser. I look forward to being back in Boston in just 6 weeks for the race of a lifetime! 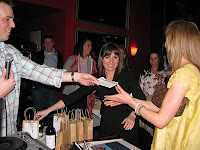 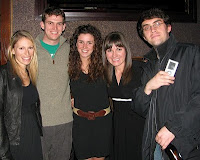 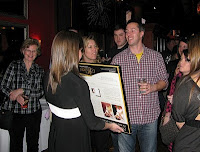 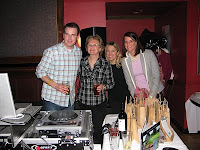