“I wanted to ensure her that I love her
and would support her through anything.”

REM Runner’s Note: This is a story of love. I was thrilled to learn about the Dream Big Concert and even more thrilled to hear Kevin and Megan’s journey toward creating this event. I asked Kevin to write a guest post here. 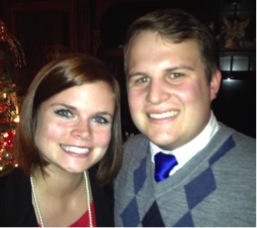 My girlfriend (and future wife), Megan Phillips, was diagnosed with narcolepsy in August of 2012. With symptoms starting around the age of 10, Megan finally was able to see a sleep doctor and after her diagnosis, she felt pretty down. Obviously, such a diagnosis could cause a chasm in a relationship and could even be something that could cause a relationship to end. However, I wanted to ensure her that I love her and would support her through anything.

In order to prove support for Megan as well as raising money and awareness, I decided to start a benefit concert where the proceeds would go to Narcolepsy Network. Megan and I are both students at Oklahoma State University, so I thought it would be cool to host a concert on campus with some of my friends as performers. Starting in October, I slowly planned the concert. After booking the theater on campus, which was used for free since we were donating proceeds to philanthropy, I got some talented friends to agree to perform. 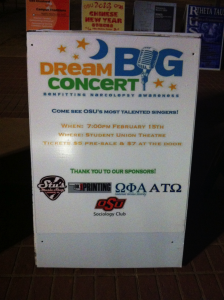 After getting most of the logistics into place, I had Megan present the idea of “working” the concert to her sorority, Omega Phi Alpha (Megan is Vice President), where their primary purpose is service. They voted to help me out, and ended up doing a lot of the things I couldn’t have done myself. For example, they passed out flyers around campus, advertised via campus advertising, ushered the event, and sold a plethora of tickets. These lovely ladies also manned a booth on campus and at the concert to take donations and do ticket sales.

We utilized a Facebook page and event, a blog I created, campus advertising and word of mouth to spread the word about the “Dream Big Concert Benefitting Narcolepsy Awareness.” Additionally, I found a company to make tee shirts with our logo and they agreed to donate the proceeds of all shirts to Narcolepsy Network. 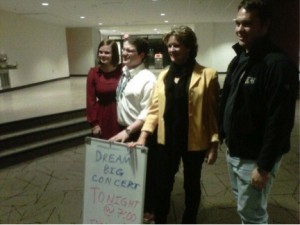 Dr. Eveline Honig, Executive Director of Narcolepsy Network, was able to fly out to our event. She spoke for a few minutes after intermission to help us raise awareness of narcolepsy to the OSU community and it was a pleasure to have her support. Narcolepsy Network also provided informational brochures and free awareness bracelets for the audience members.

The Dream Big Concert was held on Friday, February 15 on campus and we had a turnout of over 250 audience members! Many friends and family members who couldn’t make the show donated via check or our PayPal donation through our blog. In the end, through ticket sales ($5) and donations we reached our goal of raising $2,000 for Narcolepsy Network. We hope that our friends will help us make this event an annual concert raising more money every year! It was a huge success and I hope to see bigger and better concerts from other narcolepsy supporters.

REM Runner’s Final Note: Please join me in thanking Kevin, Megan, Oklahoma State University,  Omega Phi Alpha and Narcolepsy Network for making this great event possible! Thank you Kevin for supporting Megan and sharing your story here. You give us hope for a brighter future.