F*CK, I slept through Wicked. In February 2007, I was in London for spring break and splurged on an overpriced “half-price” ticket to see my favorite musical, Wicked. I’d listened to the soundtrack a hundred times, but never seen it. The first act was magical, but as the curtains raised for the second act, my lights went out.

Despite fighting hard against heavy eyelids, sleep won. Waking up in the final scene, my heart raced and my stomach clenched. F*CK. I shuffled out of the theater with lethargic disappointment.

At the time, I blamed jet-lag (even though I’d been in London a week). I blamed jet-lag a lot that week, including falling asleep in Starbucks one afternoon, thankfully with one of my best friends nearby to watch over me. Five months later, I discovered the word, “Narcolepsy” and two months after that, I was diagnosed with a serious case of narcolepsy with cataplexy.

When someone thinks narcolepsy is a joke or sleepiness is no big deal, I often tell them about Wicked. Why? Because everyone loves something – football, movies, etc.  I love musicals. So sleeping through Wicked is my version of sleeping through that big special moment in your life – like attending the Superbowl or Oscars and SLEEPING through it. Sleep is a compulsion for me, not a choice or lack of willpower.

Eight years later, I returned this week to see Wicked again – this time in Hollywood with my boyfriend, Alex (his awesome Christmas present to me). As the curtains parted, I smiled ear-to-ear and leaned forward with wide eyes. The music has been meaningful and inspiring to me personally (cheesy, I know). My face was literally plastered into the biggest awkward gawking smile.

Ironically, at intermission, Alex mentioned that he was enjoying the show. “You didn’t tell me it was so funny,” he said. Alex is NOT into musicals but a good sport to accompany me, so the fact that he liked it? Well, it was so unexpected and happy in that particular way that those with cataplexy will know where this is going… My head tingled and legs went weak. I stayed seated for a few minutes to let the wooziness pass before trekking to the ladies room and back. I wasn’t fully stable, but I made it without falling.

As the curtains opened for the second act, I thought back to Wicked in London. My throat clenched and eyes welled with tears.  Despite some cataplexy, I was here, present and fully awake, and so my big awkward smile stretched even bigger, if that’s possible. 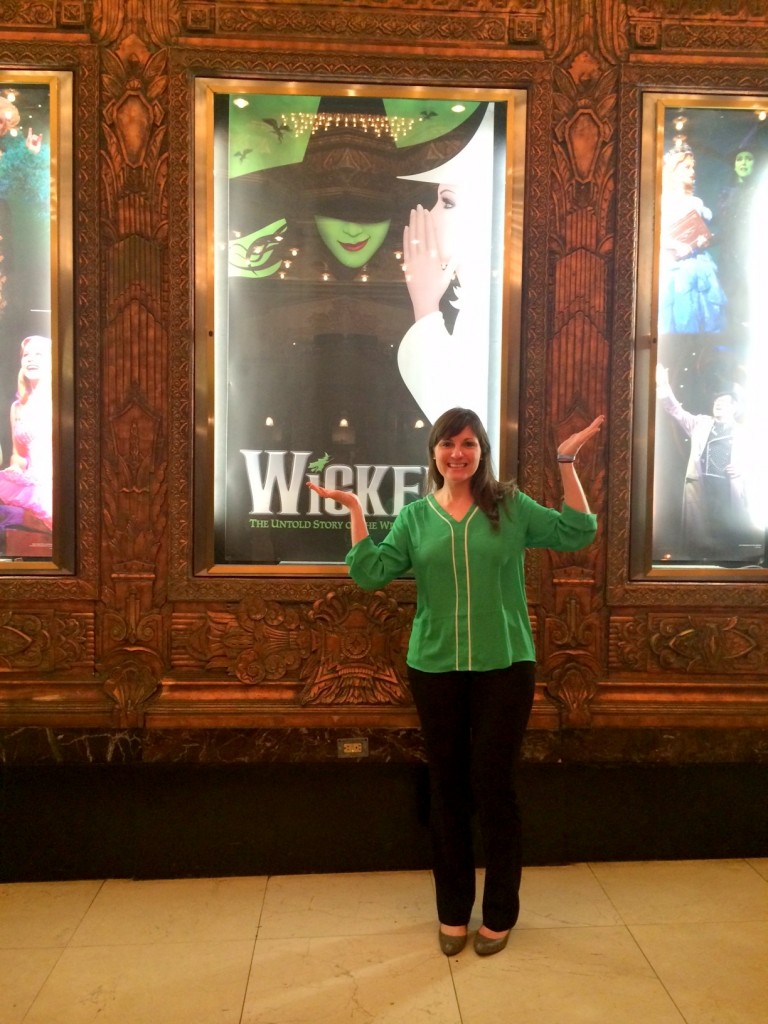 Sleep has stolen many moments from me – many throw-away moments, but also some “bigger” moments that hurt my heart to think about – like law school exams, family holidays, and Wicked. So to take back one moment felt like a small victory, a redemption, a second chance.

And maybe that second chance is a little sweeter, knowing how it feels to have lost that moment in the turbulent wreckage of an invisible illness. To walk along far enough in this crazy life to re-discover that sliver of joy, well, that’s what us New Hampshire gals call “WICKED AWWWSOME!” 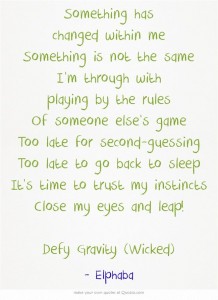